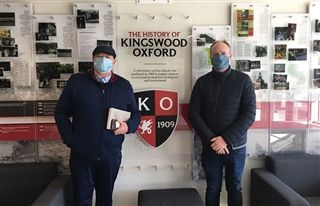 It is just short of two years that I visited our “parent” school in Bath, England, making a connection that continues to be a very special one. Our Zoom reception back in November for alumni of both our schools was very informative and hopefully, another one will take place in the near future. I am so very excited to say that a new connection has been made with our “brother” school in Grahamstown, South Africa. Kingswood College was founded in the late 1800s following in the footsteps of Kingswood School, Bath, England.

I recently had the very special opportunity to meet Murray Collier and his father, Alistair, who was visiting Murray here in W.H. from South Africa. Alistair has a very strong connection to Kingswood College as a very long-time active supporter. Back in the late 1960s, our Kingswood School opened its arms to an exchange student from Kingswood College, Brian Rom. So, I guess we can say that the connection really started back then!

A Sunday afternoon with the Colliers was spent touring the campus, asking and answering great and interesting questions, and commenting on the similarities and differences between our two schools. We parted with the hopes that we can bring our two schools closer together, and of course, along with Kingswood School, Bath-Zoom receptions, exchange programs (when it’s safe!)...

Please enjoy the following observations by Alistair Collier (with his permission), along with the photos!

Observations by Alistair Collier
Murray and I had a most interesting and enjoyable visit to Kingswood School in West Hartford Connecticut and were hosted by the School Archivist, Brenda Semmelrock.

Kingswood Grahamstown / Makhanda and Kingswood Oxford West Hartford may be on different continents and separated by the Atlantic Ocean, but as we were guided through Kingswood School one could not marvel at the parallels between these schools. Yes, the Wesleyan roots are there, and from an age perspective the two schools are relatively close siblings where Kingswood Grahamstown is 127 years old and KIngswood West Hartford 112 years old. Of course our "older" brother, Kingswood in Bath United Kingdom is some 273 years old. From the Kingswood School Mission Statement and Core Values perspective, principles such as honesty, integrity, respect, intellectual curiosity, and involvement in a community of teachers, friends and family, resonate with the Kingswood Grahamstown values. In terms of pupil demographics both schools successfully transitioned to a co-educational model in the early 1970's. From a symbolic perspective the Wyvern is visible across the schools, as seen in school badges and regalia in the sporting, cultural and academic spheres.
Both schools have magnificent campuses where the new buildings blend in with the old as smoothly as the years have rolled by. Though this was my first visit to Kingswood School, at times I found myself asking "have I been here before?" The answer is simple, the design, architecture, and feel of both schools exude a comforting yet reassuring aura that these institutions are quality educational establishments led by talented and committed educators and governors.

During our Tour it was indicated that Kingswood School has been actively reaching out to Kingswood Bath to further build on their existing relationship, and to identify areas of impact that both schools can mutually benefit from.  They were certainly interested in exploring ways to nurture a closer contact with Kingswood Grahamstown including but not limited to the possibility of an exchange programme and the value that these programs can provide to the students. At this time Kingswood School and Bath are actively investigating how they can leverage the Kingswood network, and the offer was presented to us on our tour for Kingswood Grahamstown to investigate if this is an opportunity worth investigating.  Something to think about in the future.

Our visit closed off, quite fittingly, at the Kingswood School archives. Very similar to Kingswood Grahamstown the leadership of both schools has invested a great deal in time, money, and effort in preserving the history of the respective schools.