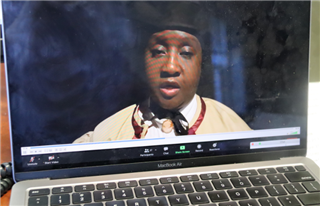 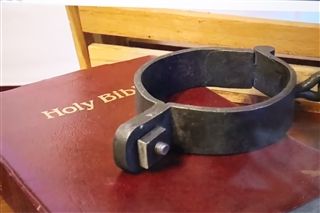 Untold Stories of The Amistad

4/8/2021
Over the past week, KO students attended a webinar on the Black history of Connecticut that focuses on the complicated history of 53 Mendeland (now Sierra Leone) men and children aboard The Amistad. To bring this history to life, KO partnered with Tammy Denease, a local performer and historian who portrays the life of Sarah Margru (one of the enslaved children aboard The Amistad), who then conducted a question and answer webinar experience for students. Prior to the performance, the students viewed a video created by local historian and consultant, Allie Kyff ’14: The Amistad - Feel-Good Narratives that are Complicated and reflected on the case and the trial, international slave trade in the 19th century, and Connecticut’s justice system.

Dressed in period clothes, Denease shared the story of Sarah Margru. Denease said it’s important to tell the human side of the story of The Amistad. Rather than simply relate the story of the legal case and the white community that helped them return to Africa, Denease focused on the people like Margu who had families who loved and missed them. Margu’s story is one of resilience and determination. She was the first African to graduate from college in America (Oberlin College, Ohio) who excelled in her studies, returned to Africa, and worked as a schoolmistress in a mission.

Denease became interested in the story of The Amistad through the actress Debbie Allen, who tried for many years to have the story of enslaved people produced. Although Steven Speilberg did create a movie about the trial, much of the story was not based on factual history according to Denease. Additionally, Denease took the job to tell the story of the Mende personally as a curator of a local museum that displayed the story of The Amistad. “I had to get through the emotional block of human beings treated so poorly. My great grandmother was formerly enslaved and all I could think of was ‘How could someone be so cruel to her?’ The more research I did, it made me realize a bigger story had to be told,” she said.

Denease believes that the most important part of her job is to be truthful, to tell the whole story in order to relate a complete picture although she tailors her script so that it is age-appropriate for the specific audiences. Originally from Columbia, Mississippi, Denease shared that in certain respects, the school system in the South was more accurate than in Connecticut in portraying the story of slavery and civil rights. When she attended school in the North, Denease said that history was made to seem like the North was the great hero when the true story is far more complex, and there was no discussion of civil rights activists like Medgar Evers.

One student asked about the difficulty of sharing a racist history. Denease acknowledged, “It’s not an easy job to make people uncomfortable.” As a facilitator for the Anti-Defamation League (ADL), she teaches anti-bullying programs. One of the things Denease explains to her students, “You are going to be talking about situations that people don’t want to talk about because of the pain that’s associated with it or because of the embarrassment... What makes it uncomfortable for most people is that there are groups who have privileges and others who have been oppressed. Trying to bring both of those stories together is challenging. I have to say to that person who is doing the work, 'Be confident within yourself to speak your truth.' Do it from a place of not shaming, blaming, or guilt. Once you can do it from that position, you are able to have an open conversation and dialogue where everyone can discuss their truths without it being too uncomfortable where you can’t proceed.”
Back