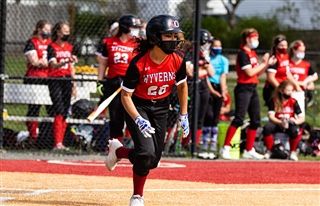 4/15/2021
Golf
The Wyvern linksters opened their abbreviated season with a trip to venerable New Haven Country Club on April 12, a cool Monday afternoon. The host Hamden Hall Hornets were much too good for KO, posting a 177 for 9 holes (collective 7 over par for 5 scores), while the inexperienced Wyverns, all in their first varsity match save Captain Henry Krieble '21, posted a team score of 230. Cole Banning '24 led the way with a fine score of 37, followed by Krieble's 38 and Teddy Keegan '22 carded a 39. KO's next and final match will feature a trip to the quiet corner to engage Marianapolis and hopefully even their season's record.

Lacrosse
The Varsity Boys’ Lacrosse team lost to Hopkins by a score of 17-11 on April 10. Coming out of the gates with energy, the Wyverns got off to an early lead in the first quarter. Hopkins was able to take advantage of some extra-man opportunities and got off to their own run in the second quarter, grabbing a strong seven-goal lead. The KO boys showed no quit in the second half and were able to close that gap to four goals. With a back and forth battle of goals, the Wyverns fell short and played a hard-fought game. Goalies Conor Caneday ‘21, Will Keegan ‘25, and Alex Levin ‘24 all played in the game and made great saves against a team with a lot of talented shooters. The defense was lead by a strong unit of Pat Schwab ‘22, Tyler Cavo ‘22, Garret Gallup ‘22, and Graham Wiggenhauser ‘25. KO was able to get a wide mix of players involved on offense and the attack unit led the way controlling and tempo and scoring points.

The Varsity Girls’ Lacrosse team lost to Greenwich Country Day school by a score of 11-8. After getting down early, the Wyverns came back strong in the second half challenging Greenwich down to the very last second of the game when Ellen Jacobson ‘23 scored off a free position shot with .5 seconds left. Chayse Schamleffer ‘23 had another solid game in goal with 12 saves. Keegan McMahon ‘21 played strong low defense and did a solid job clearing the ball. Lindsay Bailey ‘22 did a nice job on the draw, especially in the second half. Kami Tarantino ‘24 ran at mid the majority of the game and did a nice job hustling on both ends of the field. The Wyverns were led in scoring by Kaiya Deurloo ‘22 with 3 goals and 1 assist, Ellen Jacobson ‘23, and Alle Kotowitz ‘23 each found the net twice and had 1 assist. Abby Congdon ‘25, Tori Swanson ‘21, and Abby McLaughlin ‘22 all did a solid job playing at mid the majority of the game with Congdon scoring her first goal of the season and Swanson and McLaughlin contributing one assist each.

The Varsity Girls’ Lacrosse team traveled to Hopkins for their first game in two years on April 10. The outcome was not in the Wyverns favor as they lost 12-6, but as the game progressed the team saw a nice improvement in their play. The teams played evenly in the second half but KO just couldn’t overcome a slow start that put them down early in the first half. Chayse Schamleffer ‘23 had a solid game in goal with 12 saves. Allie Kotowitz ‘23 found the net first for the Wyverns scoring our only goal in the first half. Ellen Jacobson ‘23 led with two goals and one assist in the game. Caroline Dawson ‘22 and Abby McLaughlin ‘22 each added a goal, while Kaiya Deurloo ‘22 had one goal and one assist. Four of our six goals were assisted and two of those assists came from Tori Swanson ‘21.
Softball
The Varsity Softball team recorded a 13-5 victory against Hopkins on April 10 in what Coach Bradley described as “A total team victory for the first win of the season." In the first home action of the season, KO jumped out early and proved too much for a young Hopkins team. With all 17 KO players contributing to 12 hits and 13 runs and 8K from starting pitcher Kyra Dunnirvine '23 and relief pitcher Niamh Foley '25, KO cruised to the 13-5 victory. Hopkins jumped ahead 1-0 plating a quick run in the top of the first inning, then KO sent seven batters to the plate in the first inning scoring three on a 2RBI triple from Hailey Williams '23 and a sac fly from Lexi Vail '22. With KO back on defense up 3-1 in the top of the second, Dunnirvine struck out two batters to get Kingswood back on the sticks. In the bottom of the second, the Wyverns took control batting around and scoring 8 runs to run the score to 11-1. Olivia Pear '21 got the scoring started with her second hit of the game with an RBI single. Foley plated three more just three AB's later with a 3RBI triple. Dunnirvine then singled to score two more runs to cap off the Wyvern's big inning. From here KO saw contributions offensively from Ava Radmanovich '21, Gabrielle Abramson '21, Sophia Brunalli '23, and Aubrey Wolfradt '24. to help give the Wyverns their first win of the young season. Kingswood plays host to Green Farms Saturday at 2:30 p.m.

Tennis
The Varsity Girls’ Tennis team lost the opening match of the year to reigning New England champions, Hopkins School. KO put forward a great effort but in the end, couldn't match Hopkins' experience and talent. The KO stars of the day were Amrita Natarajan ‘22 and Melissa Hasbrouck ‘21 who won a great match at #1 doubles. The team was super happy to be playing matches and getting the season started and are looking forward to getting back after it on Wednesday against Greenwich Academy.

The Varsity Boys’ Tennis team hosted Hopkins on April 10 and lost to them 0-7. After having the previous season canceled due to Covid-19, it was wonderful to see student-athletes having the opportunity to play. Hopkins proved to be too tough, as their lineup is quite balanced from #1 thru #6. The defeat was not due to a lack of effort on KO’s part, as they worked hard in every match. The bottom line is that the depth and talent of the opposition were too much to overcome. The strongest performance came from our Captain Jacob Schwartz ‘21, who lost a very close three-set match 4-6, 7-5, 10-4 (tiebreaker) at #2 singles. It was some of the best tennis Schwartz has played, and while the result was disappointing, the attitude and effort were tremendous. Jaden Weinstein ‘21 gave it everything he had at #1 singles, which is a tall task as he fills in for the injured and talented Max-William Kanz ‘22. Most importantly, he represented KO at the top spot with class. KO also dropped matches at the #3 (Koby Braunstein '22) and  #4 (Ethan Raisner ‘21) spots against talented opponents. The Wyverns have two Form 1 students (Pratt Blair ‘26, Ciaran Concepcion ‘26) competing at #5 and #6  singles, and these young guys held their own against very talented players. Will Elliott ‘21 competed at #3 doubles with Ciaran Concepcion ‘26 and showed impressive play as well. It was also nice to see KO kids competing in exhibition singles (Will Jacobs ‘23 and Shumayl Shiek Syed '22) and freshman Amogh Peddapothia ‘24 at #4 doubles with Raisner.

The Varsity Girls’ Tennis team lost 0-7 to a strong and deep Greenwich Academy squad on April 14. KO's four singles players played long tough matches competing throughout. Stella Dodd ‘23 had the best outing of the day at #1 singles where she won the second set before losing in a third set tiebreaker 8-10. It was a great learning experience for the young team, and the Wyverns are looking forward to their next match against Marianapolis on Saturday.
Back