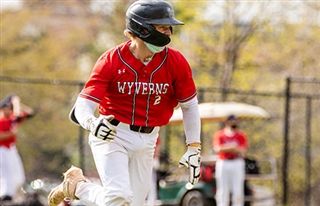 The Kingswood Oxford Varsity Baseball team took the field against Northwest Catholic on April 7 for the first time in 691 days, and came away with a 11-3 victory. Sam Smith ‘21 was 4-4 with three doubles, three RBI, while Mike DeMio ‘21 went 2-3, three RBI, with a long HR into the right-field bleachers. Riley Gravel ‘21 set the table as the lead-off hitter reaching base and scoring twice. Devin Wolff ‘23 was the starting pitcher, throwing a shutout inning and striking out two in his debut. Chase Gibson ‘22, Adam Merritt ‘24, Mike DeMio ‘21, and John Kumpa ‘21 all toed the rubber to get some work in the first game of the year.

The Kingswood Oxford Varsity Baseball team won their second straight road game to start the season on April 10 at Hopkins School. The Wyverns topped the Hilltoppers 9-1 as the senior returners lead the way offensively, along with a strong pitching performance by Devin Wolff ‘22. Sam Smith ‘21 and Mike DeMio ‘21 both went 3-4 with three RBI’s. Riley Gravel ‘21 was 1-2 with a walk and two runs scored. Wolff looked great on the mound throwing four innings, giving up only one hit, one walk, while striking out nine. Chase Gibson ‘22, Adam Merritt ‘24, and John Kumpa ‘24 all threw a shutout inning to help secure the win. Jack Kinney ‘21, Dylan Diaz ‘22, Brady Nichols ‘23, and Mitch Autorino ‘21 all contributed with a hit.

The Kingswood Oxford Varsity Baseball team remains undefeated as they win their home opener, beating Greenwich Country Day School 10-3 on April 14. KO outfielder Mitch Autorino ‘21 lead the offense going 3-3 with a double and two RBI. Riley Gravel ‘21 had two hits and an RBI, including a long triple to right-center in the bottom of the first to spark the offense. Sophomore catcher Brady Nichols ‘23 went 2-3 and drove in three runs, while sophomore Mac Louis ‘23 was 1-3 with two RBI. Junior pitcher Chase Gibson ‘22 started the game, going three innings, giving up three runs on four hits and three walks, while striking out three. Adam Merritt ‘24 gave the Wyverns two innings of middle relief, surrendering four runs on three hits. John Kumpa ‘24 came into close the door to get the win, pitching two scoreless innings, giving up zero hits, one walk, striking out three.
The Kingswood Oxford Varsity Baseball team winning streak comes to an end as they take their first defeat of the 2021 season, losing 4-0 to the St. Thomas More School. The game was moved to Kingswood Oxford because of unplayable field conditions at Dodd Stadium in Norwich. The Chancellors held the Wyverns to 0 runs, and only four hits on Saturday afternoon with a strong performance by St. Thomas More’s pitcher. The Wyverns starting pitcher Devin Wolff ‘23 suffered the loss, tossing 3 2/3 innings, giving up four runs, (only one earned), three hits, two walks while striking out six. Pitcher John Kumpa ‘24 relieved Wolff in the 4th inning, and went the rest of the way for the Wyverns, throwing 3 1/3 scoreless innings. Kumpa shut down the Chancellors' offense, giving up no runs, on no hits, and no walks, striking out three. DH Brady Nichols ‘23, was the offensive leader for the Wyverns, going 2-3. Sam Smith ‘21 and Eden Nenshati ‘21 had the other two hits for the Wyverns.

Lacrosse
The Varsity Boys’ Lacrosse team lost to Greenwich Country Day by a score of 16-13 on April 15. The team started out the game strong again, and jumped to an early lead, and held it through most of the first half. In the third quarter, the Wyverns took some bad penalties and GCDS was able to capitalize on their opportunities. The KO boys made a valiant effort scoring three goals in the last four minutes to get back into the game, but we fell short against a very well-coached GCDS team. Alex Levin ‘24 started the game in goal and Conor Caneday ‘21 came in the fourth quarter to finish. The defense was lead by a strong unit of Pat Schwab ‘22, Tyler Cavo ‘22, Will Keegan ‘25, and Graham Wiggenhauser ‘25.
Offensive Stats
Chris Sienko ‘21 (1G, 3A), Will Berckemeyer ‘22 (3G), Tyler Cavo ‘22 (1G), Matt Cote ‘23 (1A), Teddy Crowether ‘22 (3A), Carter Smith ‘22 (4G, 2A). Ben Woerlen ‘22 (2G)

The Varsity Boys’ Lacrosse team got their first win of the season against Marianapolis Prep on April 17 with a score of 13-0. The team was poised and held control for the entire game. The defense made big stops, and the offense started to flow. While the team didn't shoot great as a team offensively, the Wyverns were able to get some momentum and get to a comfortable lead. Will Keegan ‘25 started the game and Conor Caneday ‘21 played the second half. They both played great and made pivotal saves throughout the game. The defense was lead by a strong unit of Pat Schwab ‘22, Tyler Cavo ‘22, and Graham Wiggenhauser ‘25.

Tennis
The Varsity Boys’ Tennis team earned its first win of the season on April 17 versus Marianapolis Prep with a score of 6-1. Both teams displayed excellent sportsmanship, which was great to see. The team stepped up to overcome the absence of Max-William Kanz ‘22 due to season-ending injury and Koby Braunstein’s ‘22 eye injury in practice on Friday. The Wyverns played solid doubles to earn the team point, led by seniors Jacob Schwartz ‘21 and Jaden Weinstein ‘21 at #1 doubles (8-2). At #2 doubles, Ciaran Concepcion ‘26 and Pratt Blair ‘26, teamed up to win 8-2 as well. It is fantastic to see two young players team up and play with such good composure. The future is very bright for these guys! At #3 doubles, Ethan Raisner ‘21 and freshman Amogh Peddapothia ‘24 played very efficiently on their way to an 8-0 victory. The singles saw Will Jacobs ‘23 earn his first Varsity victory at #6 singles without surrendering a game. Concepcion and Blair earned decisive victories at #5 and #4 singles respectively, notching their first Varsity singles wins as well. Jaden Weinstein ‘21 won in straight sets at #1 to clinch the team win. The final two matches were close and hard-fought by all involved. At #2, Schwartz split sets and prevailed 10-4 in the third set super tiebreaker. The marathon match of the day saw Raisner and his opponent at #3 singles play a back and forth match that lasted over an hour and a half! After splitting two close sets, they went to a super tiebreaker. Raisner battled back from down 8-3 to pull even at 9-9 before falling 11-9. It was great to see two players working as hard as they could, and unfortunately, someone had to lose. When the dust finally settled, KO emerged with a 6-1 team victory.
Back