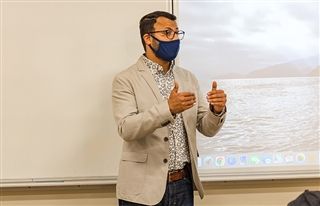 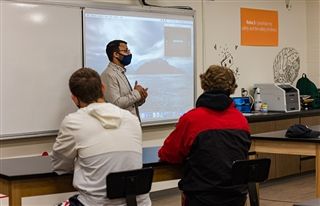 Esam Boraey: A Story of Strength, Perseverance, and Commitment to Justice

4/29/2021
Writer, speaker, activist, political figure, and professor Esam Boraey recently came to Upper School history teacher Katie McCarthy’s global issues class to talk about his role in the Egyptian Revolution and subsequent human rights activism. Boraey was one of the first seven people to protest against the Egyptian government, years before the official revolution would begin.

Boraey insightfully and candidly shared his background and experiences, painting a picture of what the Middle East and what the young generations there had to contend with. Incredibly resilient, Boraey brought these painful, moving, and transformative experiences with him to the United States and utilized them to educate people.

Boraey grew up in Egypt in a middle-class family. After finishing college early and lining up his first job as a professor, which was not typical in his country, his parents were eager for him to get married right away and start a family. He choose a different route for his future, although he acknowledged how fortunate he was to land a job so quickly. He was starting to recognize how dismal the state of the economy and opportunity in Egypt was during that time. He shared with the students in the class that the few in power were concerned only with making life good for themselves, while the rest of the country was suffering because of the government.

Despite him realizing that this would not be the popular opinion, Boraey decided he could no longer stay silent and watch his country crumble under this oppression. Instead, he took action. He organized a small protest of seven people ranging from 19 years old to 21 years. Their message? “We are here against the president, and we need to put an end to corruption,” said Boraey.

At no surprise to Boraey, this didn’t sit well with the government regime, despite Boraey's opposition group's small size and lack of power. “We were so eager and determined to yell as much and as strong as we could to let people know that there was another way,” he said. "This is where all the trouble began.”

They were chased away by the police, and Boraey was arrested for the first time in his young life. “Prisons in a dictatorship country are not great,” he said. However, this freedom-fighting work only motivated Boraey to continue his crusade and continue what he started - the building of an underground grassroots began. And the movement grew.

Boraey half smiled as he recounted that he couldn’t keep a job for longer than two weeks because the minute an employer hired him, they would get a call from the police or intelligence committee telling the company that Boraey had a black mark on his name because of his work against the government. Due to the prevalence of police presence in Egypt, businesses simply couldn’t take a chance on keeping him for fear of retribution.

Needless to say, by 2008, Boraey said, “I  had the clear message.” This work he was passionate about continuing would be a steep up road battle with no promises of victory. It would come with many impossible hurdles and challenges. And yet, he cared so deeply about changing the state of things, he pushed on.

From 2007 to 2011, Boraey went to prison four times. His jail term was between two and four weeks, and each time he was tortured, interrogated, and pushed to his brink. Each time he realized the intent of imprisonment was not for information but to place as much pain and suffering on him so he would give up on the work. Many people after being arrested decided not to go back and protest. “It was understandable,” said Boraey. “The levels of pain and suffering and tolerance differ from person to person.”

The risks increased. In 2011, things started to happen, quickly, and without warning: police arrested a poor vendor in Tunisia trying to sell his goods in an open market for not having a license. When, despite his pleas of his livelihood being gone forever, the police refused to give his wares back, he set himself on fire in front of the police station while chanting about their corruption. This prompted huge protests within the country, which became unmanageable for the police, and ultimately, the president of Tunisia fled his country.

Around this same time, Egypt had been preparing for the National Police Day, a celebration of the police, who controlled the country. Everyone came out to show their support, ostensibly so they could be protected from the police. Around this same time, Boraey had been hired as an assistant professor at a local university. He couldn’t keep the job because, in Egypt, you couldn’t get a job if you didn’t have clearance from the police - something he did not have.

Boraey and his fellow humanitarian workers sought to highlight the police, but in a starkly different way. Earlier that year, the Eqyptian police had dragged a man out of his house and beat him to death in front of his family among other atrocities. Boraey's small but mighty group used these stories to illustrate that police brutality was the norm. “What happened in Tunisia was inspiring to us,” said Boraey. “We wanted to give Egyptians hope that their country could be hopeful, too, and encourage them to come out to the streets to show their support.”

Boraey noted at this time the presence of social media was limited, so they had to brainstorm and get creative with how to bring these issues to the surface. One of the most effective methods was writing political messages on cash and distributing it around Tahrir Square, a densely populated location and the hub of government buildings, embassies, and international hotels.

“Our goal for National Police Day was to have people come for a few hours or a day to protest,” said Boraey.
Instead, his group was stunned to see hundreds of thousands of people. So many people came out, in fact, that the police started shooting and eventually had snipers firing. The internet and cable networks were shut down; the TV stations and cell phone service went silent. When the protests got too big for the police, they called in the military. “It was an amazing thing to see,” said Boraey. “Here we were watching 15 million people take part, where just five years before it had only been seven of us sitting there.” The world was witnessing the Egyptian Revolution.

Boraey thoughtfully expressed how the experience “brought on an odd mix of emotions and a level of responsibility.”  “We weren’t prepared,” he said. “I was 25 years old. I had been in prison, I had been tortured, I’ve lost friends, and here are all these people supporting our same cause and I am watching my government using military tanks to literally crush people my age. All I could think was that to some extent, I drove people to do that.”

After 18 days of demonstrations, the longtime reigning dictator of Egypt, Hosni Mubarak, stepped down and the military took over. Boraey's group, with newfound strength, continued to push for a new constitution, a new bill of rights, inspired by the American principles.

Boraey went to work with a newfound sense of urgency and intent. He worked for a political party within Egypt where he was responsible for building bridges between the international community and the new culture that was emerging in the country. Simultaneously, he was working to kick off a campaign to run for the senate on a national level.

The military got wind of his new initiatives, and quickly took action. Boraey was arrested yet again and imprisoned. “My crime on paper? Working for a human rights organization,” he said. “What they told people?” he laughed. “That I was working for the CIA and that they gave me $10 million dollars to cause riots in Egypt.” As Boraey recounted the story he couldn’t help but chuckle at the absurdity of it all.

The absurdity sharply turned to pure fear and shock. After 18 months of trial, he was released from prison, waiting on a verdict. In 2015 a judge found him guilty and sentenced him to prison. Leaving his family, friends, and an evolving political climate that he himself had helped create, Boraey made the decision to flee Egypt, and come to the United States. Here he continued his work in Washington D.C advocating for human rights, Middle East politics, and Egyptian foreign affairs.

Several years back, Boraey was honored when he was asked to work on the Bernie Sanders campaign. “They were looking for someone with grassroots experience and someone that could help garner minority support,” he said. “I was surprised because I didn’t have much experience with domestic politics. I was grateful for the opportunity and to be a part of a political system that I had always admired growing up. I learned everything that I could.”

Boraey said, “I started looking at what it meant to be white or black or brown or an immigrant or Muslim, and I started being a real part of that.”

The Bernie Sanders campaign ended in 2016, and Boraey did mini-campaigns across the country and joined many political organizations that focused on immigration, human rights, and minorities. Several years ago, he finally landed in Connecticut to work with the Democratic party to gain more seats in the state legislature.

When asked what his biggest takeaway was during his experiences with American politics Boraey reflected, “It was a huge learning curve during that time to be able to see how politics is not that different. Most importantly, it wasn’t as ideal as I expected. At the end of the day, we are human. We do what humans do which is a lot of crazy things sometimes.”

Over the years Boraey has been honored for his defense of human rights and community service. He received Personality of the Year for fighting for human rights in the Middle East by the National Center for Human Rights, the David B. Walker award for public service from the University of Connecticut, and the Immigrant of the Year from the Connecticut Immigrant and Refugee Coalition. Additionally, he has been the recipient of many certificates of appreciation by many organizations across the globe for his work. Boraey resides in Connecticut and is a professor at Wesleyan University.
Back