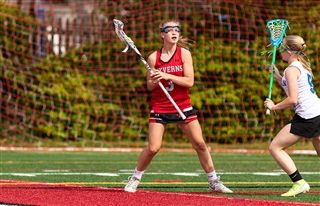 4/29/2021
Lacrosse
The Varsity Girls’ Lacrosse team won 17-1 against Christian Heritage on April 28. The Wyverns came out strong and didn’t let up the entire game. The win was a nice team effort with all seventeen girls getting quality playing time. Ten of the seventeen goals were assisted and nine girls found the net at least once. The defense did a nice job shutting down their opponents and clearing the ball upfield. Chayse Shamleffer ‘23 anchored the defense with three saves. Ellen Jacobson ‘23 led the team with five goals and one assist. Caroline Dawson ‘22 and Kaiya Deurloo ‘22 both had two goals and two assists. Alle Kotowitz ‘23 contributed two goals and one assist while Quinn Kearney ‘23 had two goals. Abby Congdon ‘25, Kami Tarantino ‘24, Celia Yaworsky ‘24, and Catherine Daniels ‘21 all found the net once.

Softball
The Varsity Softball team won against Hopkins with a score of 17-5 on April 26. The Wyverns pushed to continue their winning streak to three games with an offensive explosion, taking the wire to and jumping ahead 5-0 in the top of the first inning. The fast start was headlined by big hits by Hailey Williams '23 3-0 2 RBI triple, and Lexi Vail '22 RBI double pushed the score to 3-0. Ava Radmoanovich '22 and Olivia Pear '22 each singled to bring in runs to push the score to 5-0. Hopkins rallied back in the bottom of the first plating a pair of runs to cut the deficit to 5-2. With both teams settling in, the pitchers dueled it out in the second inning and third innings with each pitching holding down the opposing offenses. In the top of the fourth with the Wyverns up 6-3, Lexi Vail '22 blasted a 2R HR over the center field fence to put KO up 8-3. Kyra Dunnirvine '23 at this point in the game had settled into what would be a 15K performance stopping Hopkins rallies in the third and fourth innings. She finished the fifth, sixth and seventh innings striking out six batters. The Wyverns continued the offense by scoring four runs in both the fifth and seventh innings. Aubrey Wolfradt '24, Sophia Radmanovich '24 all contributed during those rallies with hits Gabby Abramson's '22 RBI single finished off the scoring for the Wyverns 17-5 victory.

Tennis
The Varsity Boys’ Tennis team won 7-0 against Hamden Hall on April 21. The final score does not in any way reflect how close this match was, as the doubles point came down to the wire and three of the six singles matches went to a third set super tiebreaker. In what could have been a 4-3 match, either way, KO emerged with a 7-0 victory by taking all three of the singles super tiebreakers and winning the doubles point with an 8-6 win at #3 doubles (Shumayl Shiek-Syed ‘22 and Will Jacobs ‘23). Perhaps the strongest performance of the day came at #1 doubles as seniors Jacob Schwartz ‘21 and Jaden Weinstein ‘21 got out of the gates quickly and rolled to an 8-0 win. Hamden Hall’s #2 doubles team edged the 7th grade duo of Ciaran Concepcion ‘26 and Pratt Blair ‘26 by a score of 8-5. In singles play, KO earned singles wins in super tiebreakers at #1 (Weinstein), #3 (Ethan Raisner ‘21), and #4 (Blair). Raisner and Blair each battled back from dropping the first set, earning nice comeback wins. Schwartz (#2), Concepcion (#5), and Jacobs (#6) earned straight-set victories to close out the scoring. Both teams played with terrific sportsmanship in a match that lasted until 7:00 p.m.

The Varsity Boys' Tennis team lost to Greens Farms Academy 0-7 on April 28. Greens Farms was significantly stronger, and arguably one of the best teams in all of New England. Coach Krugman said, "I was incredibly proud of how the KO team competed. We worked very hard and played some of our best tennis. Most importantly, we played with class and sportsmanship. This match was not about the outcome in terms of score, but rather about our guys demonstrating the right way to play the game." Jacob Schwartz '21 played singles in one of his strongest performances to date against a player who is in the top 140 nationally. Jaden Weinstein ‘21 also played some of his best tennis, both in singles and doubles. The same can be said for Koby Braunstein ‘22, who teamed with 7th grader Pratt Blair ‘26 in a hard-fought 8-2 loss at #2 doubles. Ethan Raisner ‘21 played quite well in his doubles match, and Ciaran Concepcion ‘26 showed great composure at both #3 doubles with Will Elliot ‘21 and at #6 singles. Will Jacobs ‘23 and Shumayl Sheik-Syed '22 made great strides in their exhibition singles matches, too.
Back