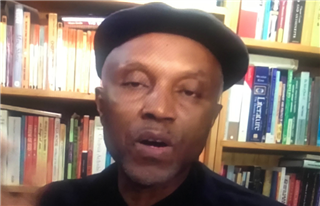 4/30/2021
Global Cities (Form 3 history) is currently studying Nigeria, predominantly with a focus on Lagos and the Niger River Delta, and issues with structural inequalities due to colonialism, religious conflict, oil corporations, and climate change.

As a culminating experience for this unit, the class hosted a webinar with Dr. Okey Ndibe, a notable, local author, scholar, and parent of three former KO students, who grew up in Nigeria. He moved to the US in the early 1980s when  Chinua Achebe, the author of Things Fall Apart, invited Ndibe to the U.S. to edit a publication.  Ndibe became a U.S. citizen in 1996 and said, “In a lot of ways I hold the two countries in conversation. I love things about both countries and have harsh conversations with both countries. My American identity and my Nigerian identity are interspersed beautifully.”

Ndibe explained the richness of Nigerian culture - a multinational state inhabited by more than 250 ethnic groups speaking 500 distinct languages. The three largest ethnic groups are the Hausa–Fulani in the north (mostly Muslim), Yoruba in the west, and Igbo (mostly Christian) in the east. After Nigerian independence in 1960 from England, there was fierce competition among the groups for control of the country’s newly discovered resource of crude oil as well as political power.  “ There were issues of ethnic distrust and suspicion -  with minor groups also complaining about marginalization.  The drama of Nigeria, the tragedy of Nigeria is one of a country that hasn’t been created but has been eaten up. After independence, the refrain was ‘We need our fair share of the national cake.’ But, nobody was talking about baking the cake.” All of these factors including the colonial articulation of the country drove the country to a 30-month civil war in 1967.

Ndibe lived through the toll of the war and shared some of his terrible memories from that time: believing his parents were bombed when he was getting firewood, to witnessing a man collapsing on line for food aid, to seeing cars strafed with bombs and the charred remains inside. But, there are beautiful memories, too, of when his father went hunting for guinea fowl on the shores of a river. “All of these memories have shaped the person that I am and the writer that I am and the urgency to advocate for my country founded in justice,” he said.

Ndibe is an outspoken critic of the corruption that plagues Nigeria which he describes as “a country conceived in hope but nurtured by its leaders into hopelessness.” As the country has swelled in population, its problems have been compounded and its resources have been plundered by corrupt politicians and military dictators. Due to his criticism of the regimes, Ndibe has often been jailed when he returns to the country. He noted that Nigeria has many enlightened and educated people who, unfortunately, do not have the visionary leadership that they crave. He worries that religious violence is on the rise, particularly with Boko Haram, and that the country could stumble into another war.

Despite the hardships of the country, Ndibe said that Nigeria is a place steeped with a sense of community which “enables people to get on even though the poverty can be crushing.” Ndibe has no time for bitterness, and he faces his life with “radical optimism.”
Back