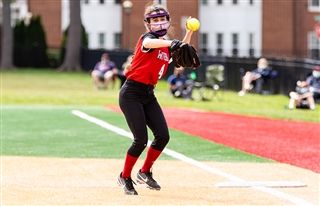 5/6/2021
Baseball
The Varsity Baseball team exploded for 12 runs in the first inning and went on to a 19-2 victory over Christian Heritage on April 28. The Wyverns starting pitcher, Devin Wolff ‘23 set the tone in the top of the first inning by striking out the side. The KO offense came out firing on all cylinders in the bottom half of the inning. Shortstop Riley Gravel ‘21 led off the inning with an HBP stole second and scored on a single by Mike Demio ‘21. Sam Smith ‘21 and Dylan Diaz ‘22 followed with walks before Mitch Autorino ‘21 smashed a 3-1 pitch over the left fielders head for a bases-clearing triple and a 4-0 lead. The Wyverns proceeded to bat around in the first inning and loaded the bases for Smith, who jumped all over a 2-2 fastball, crushing a towering shot over the left-field fence for a grand slam. John Kumpa ‘24 contributed offensively going 3-3 with a double, and Sean Habeeb ‘24 was 2-2 with two singles. The Wyverns when on to score 19 runs on 10 hits for the win. Wolff ended up pitching two scoreless innings, giving up no hits and striking out six. Landon White ‘21 pitched a scoreless inning striking out three.

The Varsity Baseball team was defeated in a tough game against Marianapolis 4-5 on May 1, losing on a walk-off single in the bottom of the seventh inning. Marianapolis held the Wyverns bats to only four hits in a back and forth game. Shortstop Riley Gravel ‘21 had the biggest hit for the Wyverns crushing a triple over the head of the right fielder for 2 RBI.  Mike Demio ‘21, Eden Nenshati ‘21, and Dylan Diaz ‘22 had the only other three hits for the Wyverns. Pitcher Chase Gibson ‘22 started on the mound for the Wyverns pitching four strong innings, giving up one earned run on three hits while striking out three. The Wyverns took a 4-3 lead into the sixth inning but couldn’t hold on, giving up one run in the sixth and the winning run in the bottom of the seventh for a 5-4 loss.

Lacrosse
The Varsity Girls’ Lacrosse team won 16-6 against Hamden Hall on May 5. The Wyverns came ready to play and hustled all over the field the entire game. Anchoring the defense was Chayse Schamleffer ‘23 with ten saves. Abby McLaughlin ‘22 was stellar in the midfield with her transition play, controlling the draw six times and dishing out two assists. Kami Tarantino ‘24 came in at midfield and took over the draws with six draw controls. Also playing in the midfield and making contributions were Tori Swanson ‘21 with one goal and one assist and Lindsay Bailey ‘22 with one goal and two assists. Ellen Jacobson ‘23 and Kaiya Deurloo ‘22 combined for ten of KO's goals with Jacobson finding the net six times and Deurloo four. Rounding out the offensive effort was Caroline Dawson ‘22 with two goals and two assists, Alle Kotowitz ‘23 with one goal and two assists, and Annabelle Jacobs ‘23 with one goal.

Lacrosse
The Varsity Boys’ Lacrosse team played a hard-fought game against King School on May 1, 0-14. The KO defense played very solid, slowing down King’s strong offense the entire first half. The KO offense was unable to capitalize on their opportunities, and King School ended up pulling away with a win. The boys played with incredible heart, sportsmanship, and never gave up.

Softball
The Varsity Softball team won 7-1 against Green Farms Academy on April 28. KO got the scoring kicked off in the top of the first inning when Kyra Dunnirvine '23 singled to lead off the game and scored on a Niamh Foley '25 single. Green Farms answered in the bottom of the first also scoring their leadoff batter to tie the game at 1-1. KO answered right back in the top of the second inning with two outs. Dunnirvine doubled down the third baseline, Mackenzie Caruso '23 walked to put runners at first and second with two outs. Hailey Williams '24 rocketed the first pitch of her at-bat over the left-center field fence for 3R HR to put KO ahead 4-1. This would prove to be the game-winner as the Wyverns tighten up on defense holding Green Farms six runners on base and not allowing them to score another run the rest of the way. To make a comeback more of a challenge for Green Farms, KO added three more runs in the top of the seventh with hits from Hailey Williams '24 and Lexi Vail '22 and RBI hits from Niamh Foley '25 and Aubrey Wolfradt '24. The Wyverns also saw a standout defensive performance from Caitlin Budzik '21.

Softball
The Varsity Softball team had a doubleheader against Marianapolis on May 1, losing 6-9 in a hard-fought battle. The game kicked off as most have between these schools in recent memory battling it out pitch by pitch. KO raced out to an early lead, as has been the case in almost every game this season, jumping ahead 2-0 in the top of the first inning with Kyra Dunnirvine '23, Mackenzie Caruso '23, and Lexi Vail '22 all reaching on errors on hard-hit balls in play. Dunnirvine and Caruso came around to score on a sac fly and a fielder's choice to put KO ahead 2-0. Not backing down from the challenge, Marianapolis came roaring back in the bottom of the first to tie the score 2-2. From here on, the game had the feeling of building for seven innings of great softball with one team not being able to push the other team to the brink. In the top of the fourth KO took a 3-2 lead with Lexi Vail '22 drover an RBI single over the to right side scoring Hailey Williams '23. The bottom of the fourth at the hand of KO's toughest defensive inning of the season Marianapolis benefited plating seven runners pushing the score to 9-3. At this point in the game, some had the feeling this could get out of hand quickly. However, the Wyverns locked it down and went back to work pushing off the struggles from the fourth inning and rallying to score two in the top of the sixth to cut the lead to 9-5, the highlight an RBI single from Brieanna Toedt '21. After holding Marianapolis scoreless again in the sixth, KO went to work scoring again in the seventh, cutting the lead to 9-6 and trying to push that rally harder and harder. Marianapolis was able to nail down the final out and secure the win in game 1 of the doubleheader.

In-game two Marianapolis took the win with a score of 3-6. It was a classic pitcher's duel with Kyra Dunnirvine '23 starting in the circle again for the Wyverns coming off 7IP 7H 3ER 6K performance in game 1. This game did not disappoint and was completely the type of game you would expect from these schools. Pitchers battling it out inning by inning and pitch by pitch. KO finally broke the scoring open in the top of the first taking a 1-0 lead following Hailey Williams '23 leadoff single. Marianapolis answered right back in the bottom of the third inning with the score at 1-1, and then took the lead 3-1 in the bottom of the fourth. At this point in the game, the Wyverns were battling base runners on in every inning, opportunities to open the game up with a big inning at any time. Looking for that big hit to take advantage in the fifth, Hailey Williams '23 homered to left field, slashing the deficit to 3-2. Aubrey Wolfradt '24 started the sixth off with a great at-bat coming back from and 0-2 count to work a walk. She would come around to score and tie the game 3-3. KO, with another chance to score in the top of the seventh, fell a little short. Marianapolis ended the game with a walk-off home run and took the win 6-3.

Tennis
The JV Girls’ Tennis team faced off against Sacred Heart on May 1, a beautiful Saturday afternoon, coming away with a 0-8 loss. Although the team lost, the girls played their best and kept most of their games close. On the doubles side, 2019 season veterans Snehaa Ram '21 and Aliza Sadiq '22 picked up a few wins in their two seed match, and veteran Macy Isenberg '22, who also played well in her one seed singles match, accompanied team newcomer Charlotte Mandell '22 in the first match of her tennis career. On the singles side, team newcomers put in a good showing against stiff competition. Sophomores Jhanvi Daddala '23, Alyssa Temkin '23, and Alisa Ruban '24, all stepped in for debut matches on the singles side, with Temkin and Ruban circling back for doubles as well. On the organizational side, team manager Evan Banning '21 made the long haul to the state line and cheered on each match, providing much-welcomed support on the road. Although the overall result was not as the team had hoped, each player stuck it out and demonstrated just how much they have developed their individual play.

The Varsity Girls’ Tennis team defeated Hamden Hall 5-2 in a well-played match on May 5. The afternoon started with teams splitting the opening four singles matches. KO enjoyed comfortable wins from Stella Dodd '23 at #1 singles and Abby Baier '23 at #3 single. The Wyverns were then able to sweep the three doubles matches securing the victory.
Back