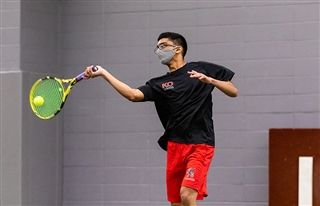 5/20/2021
Lacrosse
The Varsity Boys’ Lacrosse team finished the 2021 season with a 2-12 loss against a Greens Farms Academy on May 15 team led by 10 seniors. It was a great day for lacrosse and both teams were ready to play. Battling some injuries and illness, KO boys worked extremely hard and made some great plays. The team came up short and ended up losing to a solid GFA team. Said Coach Brett Garber, “Not knowing it would be the last game, the boys’ should be very proud of how they carried themselves and battled through all adversity during the 2021 season.” Conor Caneday ‘21 and Alex Levin ‘24 both shared the net. The defense was lead by Pat Schwab ‘22, Garrett Gallup ‘22, and Graham Wiggenhauser ‘25.

The Varsity Boys’ Lacrosse team lost to Hopkins by a score of 14-4 on April 10. The team got off to a slow start, getting down by 6 goals in the first quarter. Hopkins controlled the tempo and did not let the Wyverns back into the game. The KO boys finished the game playing very hard and never gave up. Goalies Conor Caneday ‘21 and Alex Levin ‘24 played in the game and made great saves against a team with a lot of talented shooters. The defense was lead by a strong unit of Pat Schwab ‘22, Garret Gallup ‘22, and Graham Wiggenhauser ‘25.

Tennis
The Varsity Girls’ Tennis team defeated a strong Greenwich Country Day squad 5-2 on May 19. The Wyverns played their strongest match of the season. Each girl in the ladder played great tennis and fought super hard. It was a tremendous team victory.

The Varsity Boys’ Tennis team lost 5-2 in their match against Wooster on May 8. This was an extremely competitive match, as the two teams were pretty evenly matched. Ultimately, Wooster’s balanced lineup proved to be too tough for the Wyverns. After KO secured the always important doubles point with wins at #1 (Jaden Weinstein ‘21 and Jacob Schwartz ‘21) and #3 doubles (Wil Elliot ‘21 and Ciaran Concepcion ‘26), KO only needed to split the six singles matches. Wooster’s excellent balance/depth proved to be the difference as they earned victories at #1,3,4,5,6. KO’s Weinstein played quite well at #2 and earned the lone singles victory. The loss was not for a lack of effort. It was simply a case of being outplayed by an opposing team that played with smarts, ability, and mental toughness. Said Coach Andy Krugman, “As we know, sometimes you win and sometimes you lose, and today was a day that we were beaten. It happens, and I am proud of our kids for once again competing with good sportsmanship.”

The Varsity Boys’ Tennis team traveled to Hamden Hall on May 12 for a rematch of an extremely competitive match from a few weeks before and came away with a 7-0 win. It was sure to be a closely contested match, as in the previous match three of the six matches went to 3rd set super-tiebreakers and the doubles point was earned after splitting two of the doubles matches and winning the 3rd. As predicted, this match was almost identical. Once again, three of the six singles matches were determined by a third set super-tiebreaker, and the doubles point was earned after winning a third doubles match after splitting the other two. And once again, KO was able to win all three of the tiebreakers to win the match 7-0, even though the final score was deceptive because the match was much closer than that. Jacob Schwartz ‘21 and Jaden Weinstein ‘21 won at #1 and #2 respectively in straight sets, and Koby Braunstein ‘22 earned a victory in a well-played super-tiebreaker 10-8. The #4 and # 6 matches also went to tiebreakers, with Ethan Raisner ‘21 and Ciaran Concepcion ‘26 scratching out wins. Lastly, senior Wil Elliot ‘21 made his singles debut at #6 and won in straight sets. The team showed good mental toughness in winning all of these close matches!
The Varsity Boys’ Tennis team had a hard 0-7 loss on May 15 against Greens Farms Academy. Most importantly, the Wyverns recognized the four seniors for their many contributions to the tennis program: Jacob Scwartz ‘21, Jaden Weinstein ‘21, Ethan Raisner ‘21, and Wil Elliott ‘21. Said Coach Andy Krugman, “We will miss them, and wish them well as they head off to college in the fall.” Based on the team's previous match with Greens Farms Academy, they knew that they are super talented and amongst the elite teams in all of New England. The issue was not whether KO would win or lose, but how the team competed. Said Krugman, “I am proud to say that we played some excellent tennis, and though we lost 7-0, the kids played at a high level and with class, and that is something to feel good about. We also could celebrate an exhibition of singles victory by newcomer Sean Gilland ‘22. One of the reasons team tennis is great is because the entire team can enjoy a victory by a teammate. Our guys did a great job, and playing extremely talented players only make us better.”

The Varsity Boys’ Tennis team claimed a strong 6-1 victory against Greenwich Country Day on May 19. The Wyverns played well against a young team from the newly formed GCDS high school, who will become a formidable team in the years to come. They played a 4 singles, 3 doubles format with no repeating, which is a format they never play. The boys were up to the challenge as the team went 10 players deep. Jacob Schwartz ‘21 set the pace at #1 singles with his best match yet, winning 6-0, 6-0, and making very few errors. Koby Braunstein ‘22 at #2 won 6-4, 7-5 against a talented freshman, and Ethan Raisner ‘21 at #3 also won in straight sets 6-2, 6-3. Sean Gilland ‘22 competed hard but came up short 6-7, 3-6 at #4 singles. KO swept the doubles as Jaden Weinstein ‘21 teamed up with Pratt Blair ‘26 to win 6-3, 6-0. Wil Elliott ‘21 and Ciaran Concepcion ‘26 cruised to a 6-1, 6-1 win, and at #3 doubles sophomore Jacobs and Shumayl Shiek-Syed ‘22 earned a 6-4, 6-2 victory. Lastly, in an exciting exhibition match (#4 doubles), Cevi Concepcion ‘22 and Raisner came back to win 4-6, 6-3, 10-7 as Cevi hit some great shots down the stretch to pull out the tiebreaker.
Back