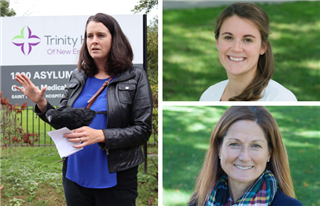 5/25/2021
Three faculty members of Kingswood Oxford were awarded prizes at an end of the year assembly on May 25.

THE ROBERT B. SWAIN III MEMORIAL AWARD honors that continuing teacher in his or her first five years of teaching at Kingswood Oxford, and his or her first ten years of teaching overall, who best exemplifies Bobby Swain’s outstanding attributes as a student and teacher: a serious, self–disciplined approach to learning and a sense of humor—a combination that enabled him to inspire in others a spirit of cooperation which made scholarly disciplines a pursuit both joyous and rewarding.
Mela Frye

THE CHARLES W. COLLINS AWARD FOR EXCELLENCE IN TEACHING The Collins family—Kim ’75, Wylie ’79, Tris ’81 and Jed ’88 along with their parents, Nancy and Allen—established this award for excellence in teaching named for Charles W. Collins, Mr. Collins’ father. Charles Collins spent fifty years as a teacher, coach and administrator in the Everett, MA public school system.
Kata Baker

The JOSEPH AND JO-ANNE ALISSI COACHING AWARD was established in May 2009 by the Alissi Family – Jim ’85, John ’89 and Joey ’90 after Joseph passed away in April 2009. A Springfield College and National Hall-Of-Fame wrestler and official, as well as a member of the Kingswood Oxford Athletic Hall of Fame, Joe spent 48 years as a teacher, coach, athletic director, and cherished friend at Kingswood Oxford. He was awarded the Founder’s League Swan Award in 2002 recognizing him for his outstanding work in developing leadership and character in his students.

Jo-anne spent 22 years in the Kingswood Oxford athletic department as a coach and assistant Athletic Director and her positive attitude and her school spirit were second to none. The Jo-anne Alissi Field Hockey Award was created in her honor to be given to the player who best embodies the selfless spirit and enthusiasm Jo-anne demonstrates in everything she does.