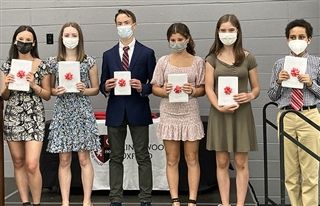 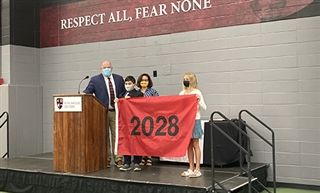 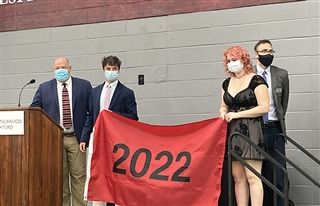 Convocation 2021: Charting a promising path for the school year

9/5/2021
The official start to the school year had an extra layer of excitement to it as the entire KO community was able to gather together, in person, in the Hoffman Field House to celebrate Convocation and welcome students, faculty, and staff back to campus. Like much of 2020, last year’s event had to take place virtually via Zoom so this was an emotional start to the 2021 school year.

Head Prefect Stella Risinger ‘22 welcomed all the new faces in the crowd and then smiled as she acknowledged how nice it was to see everyone gathered together, “I really did miss this,” she said. Following in the footsteps of Head Prefects prior, she shared a story she felt “embodied some of the core morals of our community,”  about an emperor who was looking for a successor and a little boy Jun, who came to be his choice based on his true authentic self, although he felt scared doing so. Risinger said, “That’s exactly what we look for and want at KO. For everyone in our community to come as themselves and feel love and embrace doing so. I hope that you embrace this as you embark through this year, and every year onwards.”

Speaker David Shi ‘22 welcomed everyone back and shared a positive outlook for the year and charged the students to be present and soak it all in. He remarked that while they might not remember every single fact and figure in every class they took over their time at KO, they would remember the feelings that they had and the experience of being a part of such a great community.

The Dux Prizes were awarded to the students who held the highest grade point average of their class at the end of the year. The awards went to Natay Belachew (Upper Prep), Norah Pond (Form 1), Ysabel Albert (Form 2), Carson Zielinski (Form 3), Maggie Dwyer (Form 4), and Emma Levinbook (Form 5).

In another long-standing tradition, class flags were presented to Upper Prep and Form 6. Accepting the Upper Prep flag were Julia Stepnowski ‘28 and Jace Brett ‘28. Students with the most community service hours, Charlotte Mandell ‘22 and Will Berekmeyer ‘22, accepted the flag for the Class of 2022. Sam Krugman '22 and Allie Wildstein '22 stood to accept the shield, which each senior engraves with their name at a carving ceremony later in the school year.

Head of School Tom Dillow was a familiar and warm presence and shared his excitement to be back in person kicking off the school year. He took a few minutes to walk the community back through the history of how the Kingswood school and the Oxford school merged into the co-ed Kingswood Oxford we know today. He shared that the school’s motto, Vincit Qui Se Vincit - "One Conquers By Conquering Oneself," came from Oxford and the school mascot, the infamous Wyvern, came from Kingswood. “Whether you realize it or not, KO will now forever be a part of your life. It’s your place. It’s your community.” He went on to describe how while students will scatter for college, jobs, families, they will always have Kingswood Oxford as “part of your personal lexicon.”

He gave a thoughtful recap of last year, a year of virtual classes, canceled dances and social events, travel halted, and an overall paused society. He pointed out that we often take for granted the ordinary things in our lives and become settled and accustomed to our same routine. If ever there were a year that we learned to appreciate and embrace the routine, day-to-day things, the last year and a half would be a strong contender. “Meanwhile," said Dillow, "our country has faced a great reawakening in the aftermath of the murder of George Floyd and is still wrestling with the realities of ongoing discrimination and implicit bias. Our government is more divided and our politics more polarized than perhaps any time in our history.”

Despite the challenges we, as a community and as a nation, are up against, Dillow shared the incredible faith he had that Kingswood Oxford would rise above this. He charged the students, faculty, and staff with being the kind of community to lead by example. Dillow said, “That means respecting every person as a whole person. It means using kindness. It means acting with integrity. It means including others and seeking what’s best for them. It means having the courage to stand up for what is right or when someone is being wronged. It means not accepting language from your peers that is hurtful or demeaning. It means being a friend to someone in need. Let us strive to make the 2021 school year the very best version of Kingswood Oxford yet.”
Back