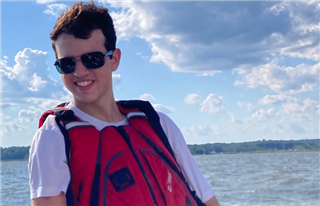 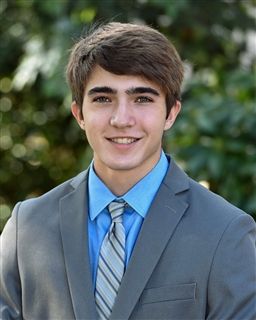 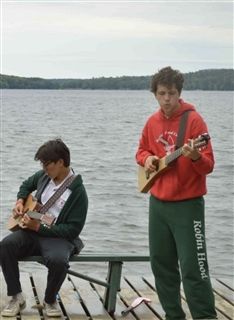 Honing New Skills in the Summer

9/15/2021
Summer is a time to kick back, but for some Wyverns, it’s an opportunity to flex their skills, develop leadership qualities, and make some extra cash. Dan Raymond ’22 and Ricardo Croes-Bal ’22 both worked as camp counselors and practiced patience teaching young campers how to woodwork, play guitar, and sail.
Working at Camp Eagle Feather in Rocky Hill, Dan taught campers ranging in age from 6-12. Depending upon the age group, the campers were accorded various carpentry kits to construct. The younger campers crafted simple stools, learned proper sanding techniques, and “setting a nail so they won’t smash their fingers.” The older campers worked on more sophisticated kits. Once they finished their projects, they could proceed to work on one of their own such as building model trains. Admittedly, one of the more challenging aspects of the job for Raymond was learning how to negotiate the emotions of the campers. Raymond found the younger campers more open to new ideas than the older campers who tended to push back more on helpful suggestions. When emotions ran high, Raymond would counsel them in an even tone and take them for a walk which proved effective.
Raymond discovered carpentry several years ago by working on repairs in his parent’s rental property, digging up floorboards. The workman that was running the job asked Raymond if he would like to help over the summers and Raymond was all in, clocking eight-hour days full of heavy lifting and carpentry. “I’m a fan of learning new skills that can be useful in everyday life - knowing how to put up sheetrock and plywood and making cuts on the trim of a wall. It’s very satisfying when you do it,” Raymond said. One building project Raymond will tackle next is constructing a shed in his grandmother’s backyard. Currently, he and his cousin are drawing up plans and writing down ideas for materials.
When Raymond is not busy with carpentry, he runs track at KO, plays football, and is a member of Crimson 7. Outside of KO, he is active in archery, playing at Hall’s Arrow in Manchester. “As a kid, I was interested in Robinhood and then I became interested in hunting - fair chase hunting - in which there needs to be an equal playing field for prey and hunter.  If you use a firearm to hunt, it’s not equal, but with a bow and arrow, it is. I really enjoy archery which requires both mental and physical stamina. The goal in archery is for every shot n to be the same - the same placement every single time. When I have a big test, I’ve done horribly because my mind is on something else,” he said.
After attending Robinhood Camp in Maine for four years as a camper, Ricardo Croes-Ball spent this year as a counselor for 20 12-year-olds, and 12 nine-year-olds over the course of the summer. Croes-Ball is a firm believer in the transformative power of sleep-away camp. “It’s is a really unique environment when you bring a group of kids together creating an interesting dynamic. Sleepaway camp helps prepare you for life and being away from home for long periods of time. After my freshman year, I took an extended trip to Spain without my parents, and my summer camp experience allowed me to make connections and meet people without relying on them for guidance.”
Prior to heading to camp this summer, Croes-Ball attended online training to help him learn how to deal with the campers and how to earn their respect.  “One of the most important things is consistency. Some counselors would get mad at some things and not mad at other things. I was consistently strict. They knew what to expect from me and how I would react if they did something wrong.”
Croes-Ball’s biggest challenge was dealing with a tricky group dynamic and saw firsthand how one challenging camper can destabilize a group. After trying to talk to the camper several times to no avail, the counselors placed the camper in a different cabin which proved helpful and changed the experience for the better for everyone. Homesickness was a problem for all the age groups, and he learned that homesickness in some campers can manifest itself in outright defiance, not tears.
Croes-Ball would wake up at 5:00 a.m. every day for some “me” time where he would work out. Then from 7:00 a.m., he was on the go until 10:00 p.m., shepherding the campers and teaching them guitar and sailing. He taught guitar to novices as well as more advanced campers and performed Cat Stevens or The Beatles every morning at the camp “round up” or morning assembly. The beginner sailors learned technique on the lake, and the more skilled sailors were on the ocean, with Croes-Ball on a motorboat shouting instructions and ensuring the safety of all the campers. “Rule one is no capsizing the boat unless everyone wants to capsize it. You don’t want to surprise anyone on board. That’s not safe since some campers could be caught in ropes or fall on the boom,” he said.
Croes-Ball learned a lot about himself this summer through his experience. “I have to say, I am a very patient person,” he said. “I always knew that I was relatively patient but I never put that into context. I had the stamina in dealing with the kids that I didn’t know I had. Many counselors left camp because they couldn’t cope. It’s a long day with only 24 hours off every week, but I did it.”

Although some may take the summer to recharge, these Wyvenes learned some life lessons they can apply now and in the future. Well done!
Back