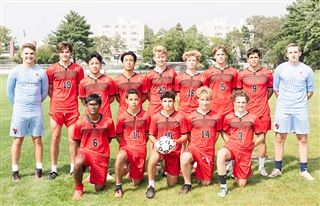 9/23/2021
Cross Country
On Saturday, September 18, the Girls' and Boys' Cross Country teams competed in a scrimmage meet at Choate Rosemary Hall in Wallingford, CT. This represents a competition without team scores or awards in preparation for the remainder of the competitive season, which starts next week at the Canterbury Invitational. Choate divided the competition into three races, one for veteran girls (previous cross country experience), one for veteran boys, and then a novice race combining both boys and girls. The course at Choate is known for its interesting layout as well as an incredibly challenging hill right before the two-mile mark.

Beginning at 2:00 PM, veteran girls took off from the finish line in sunny, hot, and humid conditions. Three members of the girls’ team (all seniors) ran in the veteran meet Olivia Reynolds '22, Stella Risinger '22, and Ashleigh Stepnowski '22. Reynolds had the fastest time for the 5.0 kilometer (3.1 mi) race, finishing in 23 minutes and 38 seconds (23:38). KO entered five boys in their veteran race who finished for us in this order: Sam Merkatz '22, Eli Johansen '22, Sam Bromberg '23, Shumayl Sheik Syed '22, and Justin Rios '22. Bromberg finished with the best time in this group, finishing in 21:51. Fourteen runners participated in the boys' and girls' combined novice race: Carson Zeilinski '24, Kami Tarantino '24, Regina Miller '22, Tommy Vumback '24, Ted Simons '24, Ryan Zheng '24, Jordan DiMauro '23, Sruthan Tokala '25, Sasha Dausey '25, Amogh Peddapothla '24, Bassil Chughtai '24, Sam Auclair '24, Cameron Hart '25, and Elsa June Cisel '22. Zielinski was the top boys' finisher with a time of 21:03. We anticipate the possibility that he will break the 20-minute mark soon. Tarantino was the top finisher for the girls with a time of 23:27.

Field Hockey
The Varsity Field Hockey team faced tough competition against Canterbury School on September 22 ending with a 1-1 tie. The Wyverns started with an early goal by Katharine Doar '22 assisted by Arie Lang '22. Great effort from goalie Caroline Boardman '22. The team held onto the lead until the last three minutes of the game forcing overtime.
Soccer
The Varsity Boys’ Soccer team KO traveled to Greenwich Country Day School on Sept. 18 to take on the Tigers in a closely played contest and came away with a 4-2 win. KO opened the scoring early on a crossing pass from Aidan Dillow ‘ 22 on the right side to Brio Aslan ‘22 who put the shot mid net for the score. Aslan would add another goal midway through the first half on a feed from Aaron Rotter ’22. Dillow would add a goal of his own from Rotter near the half to give KO a 3-0 lead. KO yielded two goals to bring the score at the half to 3-2 in favor of the Wyverns. Coach Hikmet Aslan would make some defensive adjustments for the second half, making some back-line defensive changes, as well as re-enforced direction to the midfield unit to solidify the team for the balance of the game. The prettiest goal came midway through the second half after a stellar stop at mid-field by Defender David Shi ’22 who forced a turnover and quick leading pass down the right side to Henry Pelletier ’22.  Pelletier would send a cross from deep in the opponent's end to the far post to find a streaking Shrinaath Narasimhan ’22 for a header to score the final goal. Pierce Maddox ’22 and Will Wells ’22 shared the goal duties for the Wyverns to secure the team's first win of the season.

The Varsity Boys’ Soccer team came away with a 6-0 victory against Canterbury on Sept. 22. Brio Aslan ’22 led KO to victory with five goals. The Wyverns opened the scoring early on a pass from Shrinaath Narasimhan ’22 to Aslan in the seventh minute to take a 1-0 lead. Aslan would add another goal at the 18-minute mark off a pass from Sam Cote ’24. Cote would then score his own goal in the 35th minute to give KO a 3-0 lead. Aslan would later add two more goals and a third off of a penalty kick late in the second half to complete the five-goal performance. Consistent control of the midfield by Aaron Rotter ’22 was evident in KO’s ability to maintain possession. The Wyvern backline of Aidan Dillow ’22, James Beerbower ’22, David Shi ’22, and Michael Bzowyckyj ‘24 played very well, allowing few scoring opportunities for Canterbury in the game. Pierce Maddox ’22 and Will Wells ’22 shared the goal duties for KO to secure the team's first shutout of the season.

The JV Womens' Soccer team dropped a tough opening day 1-0 decision to visiting Marianapolis Prep.
Excellent efforts from Pauline Golder '24, Margaret Miller '25, and Tess Chapman '23. Izzy Albert '25 had four saves and played well in the field during the second half.

The JV Girls' Soccer played a tough contest against Miss Porter's on Sept. 22. The team played a strong game, particularly in mid and at defense throughout the contest. Pauline Golder '24 played tremendously throughout both halves at defense and midfield while Hannah Malkin '24 commanded the defense in the second half.  Daniela Tippner '25 played strong across multiple positions. Ysabel Albert '25 and Epephanie LaBoy '23 combined for nine saves in net.
The Varsity Womens' Soccer team earned their first home win on Sept. 18 against Marianapolis Prep. Success was a product of stout defense and combination play on offense. Kyra Dunnirvine '23 had a good day in net and made two solid saves late in the second half. Georgia Louis '24 put the Wyverns on the board early in the first half and also contributed with a second-half goal. Ella Sokale '24 and Sammy Azia '23 also scored in the second half. Ashley Neikrie '24, Olivia Stevens '24, and Kaiya Deurloo '22 all had one assist.

Volleyball
The JV Volleyball team got the season off to a great start, defeating a tough Hopkins squad, 2-1 on Sept. 22. Sophia Brunalli ‘23 had a strong performance on the front line. Sophie Glazier ’23 served well,  helping secure the victory, while Abby Baier ’23 had a 7+ point serving run that moved the squad into a commanding position in the final game. On the whole, the team played well together, but there remains room for improvement. The Varsity Girls' Volleyball team had a tough match against Hopkins on Sept. 22 that tested the Wyverns on all fronts. Hopkins won the match in 3 sets (25-19, 25-18, 25-9) with a final score of 0-3. KO’s effective offensive decision-making made for highly competitive openings to each set. We started off with aggressive serving from Jill Plaut ‘23 that she followed up with formidable blocking to deter the Hopkins' offense. Co-captain Keira Sullivan ‘23 kept the offensive charge going with punishing hitting deep into the opposite side of the court, and Ava Cashman ‘24 added some creative adjustments to her hit placement to adapt to solid defense from the opponent. Naomi Wong ‘22 had an impressive serving run in the first set, keeping her composure at the pressure-filled service line. The Wyvern defense, facing one of its toughest challenges yet, was headed by Allie Arcaro ‘24 managing the serve receive in the libero position, Lindsay Bailey ‘22 making clever tipping decisions the net, and co-captain Mackenzie Caruso ‘22 going for every last dig in a difficult third set. This was a good opportunity for the team to work on our formations and communication on the court, and the team looks forward to the next match away at Wilbraham and Monson on Sept. 25!
Back