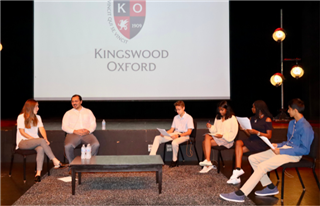 9/27/2021
Over the summer, Form 4 students engaged in an interdisciplinary reading for two classes: The Displaced, a collection of first-hand accounts of refugees for their history class and the novel Exit West by Mohsin Hamid. As a culminating experience, they heard from two former law fellows from UConn School of Law human rights clinic who shared their experiences advocating for two asylum cases as well as asylum law policies. Following their discussion, the students moderated a question-and-answer period.
Saman Azzimi is representing a gay Iranian man who is persecuted for his identity in a very conservative, religious country.  He wanted permanent status in the United States to live his authentic self and not fear retaliation from the government. Azzimi explained that since homosexuality is outlawed in Iran, people who identify as LGBTQ+ are at risk for interpersonal violence or mistreatment from the government, torture, or even death. Azzimi’s client was granted asylum on a temporary basis, and Azzimi is working with him so that he will be able to remain in the U.S. once his status has expired.  He has helped his client submit an application for asylum that will hopefully result in an interview with the immigration office. After that, the client will receive a decision. Currently, there is a tremendous backlog in cases, and Azzimi is working on strengthening his client’s case with personal testimony and the situation for gay people in Iran.
Andrea Nunes represented a family whose principal applicant is a young man from the  Democratic Republic of Congo. Initially, the family fled to Angola to escape the religious persecution they experienced. However, they were subjected to violence in Angola due to the fact they were Congolese. The family then went to Brazil where they also experienced hardships. From Brazil, the family traveled with a newborn to the US-Mexico border at a point of entry and applied for asylum. Since they did not enter on a visa like Azzimi’s client, the family is in removal proceedings where they went before a judge in Hartford this summer. Nunez described the process as more “adverserial.”
The two law fellows explained the legal definition of a refugee as a person who is outside their country of origin who has suffered persecution or harm based on race, religion, nationality, political opinion, social status, or someone who has a fear of being harmed for being in one of those groups. Azzimi said that in the law you exploit ambiguities or resolve ambiguities and one of the biggest ambiguities are those individuals who fall into a particular social group that is subject to interpretation. “Race, religion, and political opinions are rather cut and dry. But where do LGBTQ people fall in that spectrum? How about victims of gang violence or domestic violence? None of these people you interview have cases that are not heart-wrenching. The question is if they can meet the legal burden for getting legal status,” Azzimi said. Depending on the court, some decisions come down on different sides of the question.
Both Azzimi and Nunes are pro-human rights and feel that the U.S. should admit more asylum seekers. Azzimi said that less than 4% of all immigrants to the U.S. are people who are granted asylum. Statutes can be broadened and the presidential administration should do more to broaden the definition. Nunes said that one of the main critiques of our legal definition of asylum is that it is based on Euro-centric values, however, there are many people who migrate for different reasons such as climate change. “They are not recognized and have a worry over their head. They can no longer live in their countries because of rising sea levels or because they can’t farm the land because of climate change. There’s a lot of people who flee because they can’t make money. We think those are legitimate reasons for seeking asylum. But, if you can’t survive in your home country, that’s not included in the U.S. refugee definition," Nunes said.
Nunes said, “Once you are granted status, it helps people in their journey to get over their trauma and feel at peace. It’s very beautiful to watch." Despite what many think, Azzimi underscored that although many refugees are grateful to be in the United States, they feel a deep sense of loss and miss their countries and culture dearly. “It’s an incredibly painful experience but it’s the kind of sacrifice that these people have to make simply to be able to live in a lot of ways that we take for granted all the time,” Azzimi said.
Back