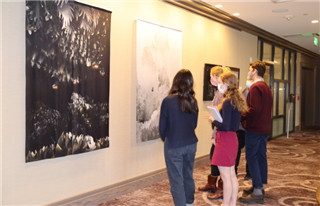 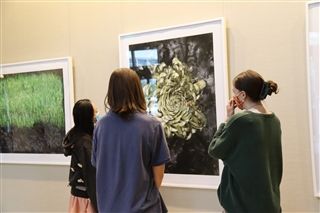 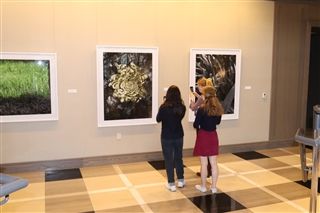 9/28/2021
AP Art History covers a tremendous amount of content across epochs, never mind centuries, from the cave paintings at Lascaux to Warhol’s Brillo boxes. To help the students draw (ahem) relevant connections between ancient artwork and more contemporary ones, Wayne Pierce organized a short field trip with his scholars to the Delamar Hotel.
In the lobby and the upper floor of the Delamar Hoel in West Hartford, there is an exhibition of the artwork of Chinese artist Jennifer Wen Ma whose work often deals with organic structures. Ma is based in Beijing and New York City and won an Emmy as a member of the creative team for the 2008 Beijing Olympics. The installation at the Delamar includes three photographic prints of Ma’s inked-plant work from 2016: Germinating Thoughts, In Furious Bloom 111, and Sprout. In these extreme close-up nature stills, the artist applied Chinese ink to the live plants and landscape and according to the accompanying description “observed the growth of new greenery from within the black, to give evidence of perseverance and resilience of life.”
In the upstairs lobby, two oversized silk hanging prints are suspended from the ceiling against a wall, one predominantly black and the other white, that recall the heritage and tradition of Chinese landscape painting from earlier masters of the Northern Song Dynasty (AD 960-1127), Fan Kuan and Guo Xi. While studying the works, the students murmured their appreciation of the quiet nature of the work and the harmony and balance of the painting. The students were perplexed by an image within the print and imagined they were seed pods. Pierce explained that in these particular works that design was, in fact, a pendulum that refers to the concept in the Chinese philosophy of yin and yang where there are complementary, interconnected, and interdependent elements in the natural world. The pendulum signifies the perfect equilibrium that exists within Taoism.

AP art history requires the students to understand the significance of 250 works of art. Pierce felt that by examining the works of a contemporary artist the students could appreciate how ancient traditions play out in the world today.
Back