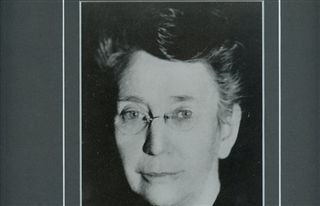 10/7/2021
Brenda Semmelrock, School Archivist
As I sat in my office in KO archives, my attention was drawn to a poster of our school motto on the office wall - “Vincit qui se vincit”.

Oxfordians and Wyverns are acquainted with this motto but most, most likely, do not know how it came to be the school’s motto. Mary E. Martin came to Hartford in 1908 to visit her sister and fell in love with the area. Miss Martin and her friend, Myra Billings, believed in the new “country day school” concept, which was founded in Maryland in 1897. “The country day school combined “intellectual, athletic and social advantages”, without removing the students from daily interaction with their families and community.” The two women set up a country day school under this premise on Oxford Street, which opened in September 1909. Myra Billings left after two years, but Headmistress, Miss Martin, along with dedicated faculty, established a school of excellence. Miss Martin “believed in manners, neatness and order, respect for elders, and a ladylike appearance.” “Stretching one’s intellect and developing one’s character” are traits that Miss Martin encouraged. It was Mary Martin who chose the motto “vincit qui se vincit”-she conquers who conquers herself-!! Wow! Our school motto certainly has been with us for a long time!

Oxford school moved from Oxford Street to 510 Farmington Avenue and then to its final location at 695 Prospect Avenue in 1929, when Founder and Headmistress, Mary Martin, retired. So, now you know! And, did you know that Kingwood’s motto was- “In Via Recta Celeriter”, which translates to “in the right way quickly”.
(Quotes found in May We Remember Oxford A History of Oxford School)