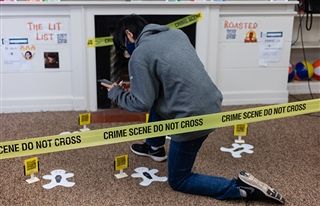 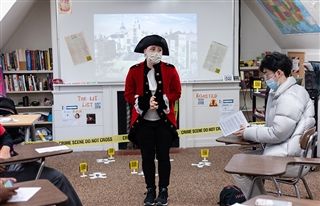 10/27/2021
Upper School History teacher Stephanie Sperber took stepping back in time to an entirely new level with her latest innovative, hands-on learning (and just plain super cool!) project: CSI: Boston Massacre. Donned in colonial garb, she greeted her students outside House One with a detailed booklet outlining the events of March 5, 1770, on King Street in Boston, MA. This was the night when five men died of gunshot wounds, fatally shot by British soldiers who were sent to keep peace in the city.

A written statement by Sam Adams, John Hancock, and others describes the backstory of what happened that night. A quarrel arose between some soldiers and the colonial ropemakers, journeymen, and apprentices which escalated quickly, leaving some wounded. Under the command of Captain Preston, a party of seven or eight English soldiers was sent out who fired upon those populating King Street, killing five people. The soldiers were quickly accused of murder by many Bostonians but maintained their innocence claiming they were acting in self-defense. They were represented by Boston lawyer and future president John Adams.
Sperber transformed her classroom into a CSI crime scene, complete with police tape, and the outlines of the bodies who had been killed. Colonial music was played in the background to set the scene. Students were tasked with gathering as much evidence for the case as possible to decide whether the men were guilty of murder or were acting in self-defense. The students' resources included collecting the facts from the case, testimony from those there that fateful night via QR codes that they scanned to listen, reading newspaper articles published recounting the events, looking at pictures of King Street painted before the massacre took place, and reading bios of each of the victims as well as the soldiers accused.

Sperber said “I love teaching history, but more than that, I love teaching young adults how to think like historians and view the world around them critically, with compassion and understanding. Activities like CSI: Boston Massacre not only provide drama and excitement in the classroom, they give students an opportunity to step into the past and analyze multiple perspectives, conflicting viewpoints, the role of propaganda and media, and use their skills to better understand the emotions of Boston on the eve of the Revolution. These skills are necessary for our students to become informed and engaged citizens in their own lives and draw parallels between the past and present.”
Back