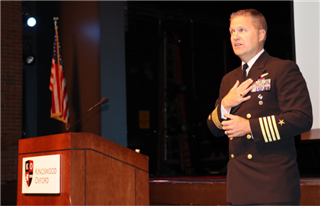 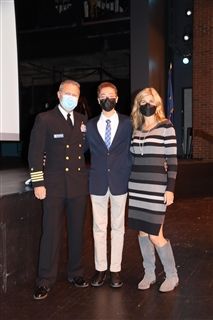 11/10/2021
In honor of Veterans Day, Captain Michael Doherty offered a talk on leadership to Upper School students at an assembly followed by a Lunch and Lead roundtable discussion to a packed house of students in the Margaret E. and Henry R. Roberts Center for Leadership. During the Lunch and Lead, the students heard more about Captain Doherty's experiences and were able to ask more in-depth and follow-up questions about his time in the military.

Serving in the U.S. Navy for 26 years, Doherty clocked over 1,000 hours flying the P-3 Orion aircraft and coordinated strategic planning and communications for naval operations worldwide impacting decisions for national defense among other notable achievements. In his final years of service, Doherty ran the Naval Academy Preparatory School (NAPS) as commanding officer and instilled in his young charges lessons in leadership. Currently, Doherty works at Raytheon and is in charge of all aspects of the TF33 military engines.
Dressed in uniform with a copious number of military decorations and bars, Doherty cut the figure of a well-respected leader who inspires those around him. He commanded the floor and shared lessons in leadership with the students by weaving his personal accounts of when he succeeded and fell short as a leader. “You observe people who are good and bad leaders every day,” he said. “Take the things you admire and say, ‘I’m going to adopt that’ and put them in your toolbox.”
Doherty’s first lesson in leadership was “believe in yourself.’ After his plebe year at the Naval Academy in 1989, he headed to the Navy’s scuba school in Panama City, Fla. in the summer for five weeks. The initial few weeks involved plenty of physical exercises, and then the sailors took to the pool where they were forced to crawl on the bottom of the pool while the instructors tied their hoses, turned off their air, and grabbed their face masks to toughen them up. Doherty’s anxiety and doubt mounted as he waited for his turn to be roughed up. One of the instructors ripped off Doherty’s face mask, and after a time, Doherty called for the regulator to be placed back in his mouth. When he surfaced the pool, there were a dozen instructors waiting for him, clearly not impressed with his performance. 'You were down there for 11-seconds without air. Get down there and do it again,' they told him. He did it, again and again. Successfully. “I was sitting there at the bottom of the pool with a bunch of self-doubts. You guys are going to do hard things in life, but if you don’t believe in yourself, you are defeating yourself before you even get started. You are smart.  You are powerful. Your mind is an immensely powerful tool so use it to your advantage,” he said.
One week after he became in charge of a unit, Doherty’s team confronted a crisis. He knew his team was prepared because he made the lead-up to this role challenging so in the real world when they hit a bump, they could handle the situation. Being ready is another important tool in the leadership toolkit. In this particular situation, a piece of equipment had fallen off one of the planes and entered the top floor of a house, inches away from a bed. Doherty’s team sprung into action: calling the Pentagon, shutting down the social media, investigating the incident, talking to the homeowner, and calling the bomb squad. “After the day concluded - it was an awful day - but, I was proud of my team. We did things right. We defused the situation. When things went wrong, we sprang into action because we made it hard. We were ready,” he said.
Doherty shared another leadership quality necessary to be effective, “choosing the harder right.” He said that he did not give the proper support to his second in command, a grizzled 28-year vet, who did not show up for work one morning because he had been drinking the night before. Doherty sat the man down, had an earnest conversation with him, and felt he had reached him. The man continued to perform well in his job. However, Doherty learned that six months after the man retired, he died from cirrhosis of the liver. Doherty acknowledged that he should have advised the man into substance abuse counseling to seek the treatment he needed. Instead, he took an easier way out and just spoke to the man rather than have a professional evaluate him.
Lastly, in one of Doherty’s missions, he and his crew had to find a fishing boat in the Pacific that had been lost at sea for 21 days. Facing this daunting task, one of his crew members was verbally skeptical of the mission and doubted that they would ever find the boat. Doherty addressed the man’s negativity and told him that he was dragging the spirits of the crew down. After almost seven hours of the search, the crew found the Costa Rican vessel. Doherty felt a positive attitude is necessary to inspire others to a good outcome.
The students were fortunate to hear of Captain Doherty’s first-hand accounts of leadership. He reiterated that people want to be led by someone who is strong, capable, and inspirational. He advised the students that if they are thrust into that position, they must raise their game and motivate others.
This assembly and Lunch and Lead were made possible through Margaret E. and Henry R. Roberts Center for Leadership. The Lunch and Lead events provide informal opportunities for students to learn about the journeys of leaders from a variety of fields. This leadership programming complements the school’s dynamic academic program.
Back