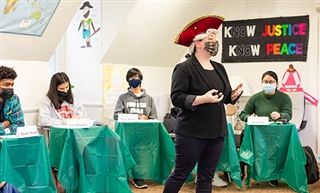 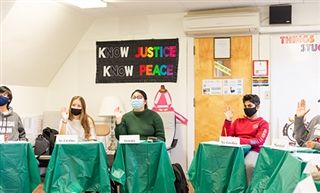 11/15/2021
Upper School history teacher Stephanie Sperber brought the issues at the federal Constitutional Convention to life by recreating the actual meeting. The Constitutional Convention which took place from May 14 to September 17, 1787, in Philadelphia, Pennsylvania assembled all the representatives of the different states. The purpose of the event was to decide how America was going to be governed. Each student was assigned a different state and approached the issues on the table from the best interest of that state, based on its size to attain its desired outcome.

The first issue discussed in the mock meeting was representation in the National Legislature. There were three positions that states could take including Position A, The Virginia Plan (representation in both houses should be based strictly on population), Position B, The New Jersey Plan (all states should have equal representation in the national legislature), and Position C, The Hamilton Plan (states should be formed into election districts, each with the same population with equal vote).
Students discussed the elements of each, including weighing in the size of their state and getting equal say. Those smaller states like Delaware were naturally more in favor of equal representation while larger ones like Virginia thought states with greater populations should have more representation. At the 11th hour, the Connecticut representative brought to the table what they called “The Connecticut Compromise,” which put forth a fourth option where one house vote would be dedicated and based on population and the other would be equal. This, ultimately, was the winning option, and Sperber put into context how this suggestion was the premise for many underpinnings of the government today and how things are voted on.

Other issues discussed were how members of the lower house should be elected, should enslaved populations be counted in determining representation and taxation, and how the national and state governments should divide power. Students had an open discussion that included listening to explanations by other state representatives about their opinion on an issue, before voting on their position. Sperber also presented the final and actual compromise of the delegates at that time.

There was particular discussion and emotion around the issue of enslaved people and whether this population should be counted in determining representation. While it was unanimous across all students state representatives that the institution of slavery was wrong and unjust, Sperber reminded the class that this was not the issue at stake during this gathering. Instead, Sperber said that the delegates needed to determine based on their states’ size and position what would gain them the most power for decision-making at a national level.

During this rich discussion, students presented solid arguments for a myriad of positions, approaches, and explanations as to why they would ultimately vote for one or another. Overall the class found that their final decisions were parallel to that which the state representative actually decided on in 1787.
Back