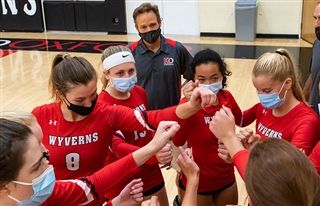 11/18/2021
Volleyball
With the walls of Hewett Gym decorated in KO’s school colors on Nov. 10, the Varsity Volleyball team gathered for the team’s last regular-season home match to proudly celebrate their three senior players, Lindsay Bailey ‘22, Mackenzie Caruso ‘22, and Naomi Wong ‘22. After a wonderful ceremony where the seniors and their families were honored, the Wyverns got right to playing, and the result was a hard-fought 3-1 win over Canterbury (25-3, 25-15, 18-25, 25-23). KO stormed into the first set, with both offense and defense in full force. Ava Cashman ‘24 started off the set with 3 service points and followed up with strong passing from the back row. Wong produced some great right-side hitting that included both deep attacks and shallow “change-up” hits that kept the opponent guessing. Co-captain Keira Sullivan ‘23 had effective cross-court hits from the outside and target serving that gave the Wyverns a commanding lead in the middle of the set. Near the end of the set, Kata Mesterhazy ‘23 had several effective blocks and some kills from well-struck hits in the middle. After a strong first set, the Wyverns looked to continue that momentum in the second set. Throughout the set, Caruso made sure that her serves were fast and laser-targeted for the open areas of the court, and in doing so she made KO’s lead unreachable. Bailey also took advantage of every serve, serving some ungettable shallow serves that brought us closer to clinching the set. Jill Plaut ‘23 was a pillar of consistency as she set for our team’s offense, and when she wasn’t setting she was pulverizing hits from the right side. Allie Arcaro ‘24 had several impromptu sets (as the libero) that kept the team going when we were struggling to reorganize our offense. In the third set, the Wyverns had some trouble on serve receive after staying so consistent in the first two sets. With great deep hitting from Cashman on the outside and Wong on the right side, the KO offense still made it a competitive set, but Canterbury was able to take the set. The team knew they were in for a battle in the fourth set, so we dug deep and stayed in it. The combo of Plaut setting and Sullivan attacking from the outside was crucial in establishing the team’s early points in the set, which gave us the confidence to keep going. Relentless defensive plays were what kept the team alive in the set, though, with Bailey and Plaut making key blocks and Cashman making a diving pass near the end of the set. It was a true test for the team as we go on to play in the postseason tournament. The coaches couldn’t be more proud of the seniors, especially, who helped lead the team to this point and who have been such a positive influence on the volleyball program during their time at KO!

The Varsity Volleyball team continued their late-season success with a 3-0 win at home against the Cheshire Academy Cats in 3 sets (25-10, 25-8, 25-22) on Nov. 8. KO got into the match right off the bat with precision serving from co-captain Mackenzie Caruso ‘22 and angled right-side hitting from Naomi Wong ‘22. There were some spectacular sets and kills from the outside with the classic combo of Jill Plaut ‘23 (setting) and co-captain Keira Sullivan ‘23 (hitting outside). On defense, Allie Arcaro ‘24 was rock solid on serve receive and Ava Cashman ‘24 was making diving saves to keep the team in competitive points. In the end, Lindsay Bailey ‘22 served KO out of the set with alternating shallow and deep serves. In the second set, the Wyverns’ offensive wave continued. Plaut made some of her best kills of the season from the right side, really hitting down on the ball to make her hits ungettable. Cashman had similar success on the outside, using topspin hits to move through and off the block at effective angles. Avi Lohr ‘24 showed that her serving practice has paid off by firing some laser-beam serves across the net to secure the team several points. At the net, Kata Mesterhazy ‘23 was ready to tip and put away anything that came her way, and on defense Bailey was prepared to provide immaculate passing to restart the offense. In the third and final set, a powerful response from Cheshire forced the Wyverns to stay focused on their offensive plays. Lohr, Arcaro, and Caruso racked up the points with effective serving that was much needed for the team to see the set out. Cashman kept the well-placed hits coming, and Jillian Alexander ‘24 had some phenomenal kills from the middle with deep hits to the opponent’s side of the court. Quin Kearney ‘23 completed the three-pronged attack on the right side with some powerful hitting, as well. The variety of the Wyverns’ game was on full display, and the team was happy to take the match in three sets.
Back