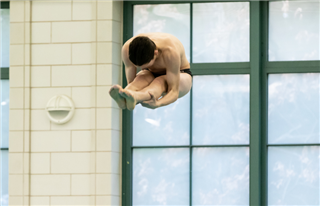 2/17/2022
As he walks towards the edge of the springboard, Elias Brandt’s ’23 of West Hartford eyes are fixed to some indeterminate spot in front of him. The air is still, thick, and chlorine-scented in the pool. A hush descends on the pool deck, allowing Brandt to close his eyes and visualize the dive.
“I have to go through the one dive in my brain that is the right way. Sometimes I visualize myself doing the dive completely wrong. I usually keep in mind that I need to point my toes more or I don’t want to throw it super hard so I don’t go too far over and make a big splash. Right before I go I take a deep breath. Sometimes if I have too much energy it throws things off and I’m not patient enough,” he said.
At the recent meet at Williston Northampton on Jan. 28, Brandt was patient and his dive was perfection, with his body barely making a splash as he entered the water. The crowd exploded. With his cumulative dives that day, he set a new KO record and a new Williston School pool record for six dives totaling 298.36 points.
Brandt’s diving accolades roll off him, well, like water: he won the championship in New England Preparatory School Athletic Council (NEPSAC), an organization that serves as the governing body for 169 preparatory schools and leagues in New England, in seventh and eighth grade, the youngest diver to accomplish this feat. In eighth grade, he broke the school record at KO three times; in eighth grade in 2020, he won first place in the Founders League, an athletic league comprised of 11 Connecticut and New York college preparatory schools with a final score of 369.60, a new 11-dive record for boys’ one-meter diving. And if his dives at Williston are any indication, Brandt’s performance at the upcoming New England meet will be equally, if not more, impressive.
Brandt started diving when he was five after watching his sister at her diving lesson. After trying the sport one time, he was smitten. At the time, he was also a gymnast, often leaving school at the end of the day to head to gymnastics practice, followed by his diving commitment.
“The aerobatics of the two sports are complementary. It’s a smooth transition to get into the sport of diving and having an air awareness - knowing where you are and having your eyes open to see where you are. When I was doing gymnastics and diving at the same time, it was a lot of time and effort but I was building a foundation,” he said. Brandt ended his gymnastics career when he was eight and continued full throttle with diving, spending a week each summer at The University of Texas at Austin diving program where he met Olympian Greg Louganis who made an impression on the young diver and whom he considers an inspiration.
A dedicated athlete, Brandt practices his craft almost every day, training out of Cornerstone Aquatics Center in West Hartford and Trinity College. During covid when the pools were closed, the divers would practice dry-land training with a trampoline and a harness to mimic the rotation in the air. From increasing his practice from three times a week to daily, Brandt feels he is able to achieve Imore successful drives
His most difficult and complicated dives are the inward double tuck in which the diver completes two somersault tucks thrown toward the board. The other dive he approaches with mettle is a front 1 ½ somersault with a full twist. “It's one of the most rewarding dives I do because when I first learned it took me a really long time to get the motion right and do everything at the right time. Now I’ve gotten to the point where it's one of the best dives that I do. It’s really important to twist and still throw a really hard aggressive somersault, but you also have to be mindful of when you are twisting. Air awareness is really important in this dive,” he said.
Ever modest, Brandt does not consider any of his dives to be perfect. He acknowledges that he has come close to performing the dive perfectly, but he still needs to work on performing his dives consistently. “For some dives where I’m more inconsistent, I have to consider where my weak points are in the dive: pointing my toes, coming out of the dive before I hit the water, or how I leave the board - because all of this affects how fast you rotate to a degree,” he said. “Now because I’m diving so much more often, I've been able to get that consistency and not be as scared on the dives that I do regularly.”
Brandt is uncertain whether he will pursue diving in college at either a D1 or D3 level. In the meantime, spectators can marvel at his poise and focus and strong and steady dives.