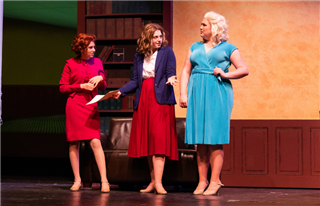 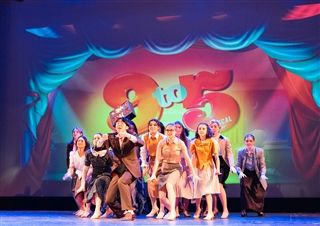 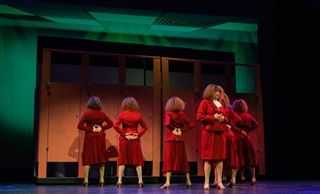 3/18/2022
KO’s thespians got down to work and sent off a blistering performance of 9 to 5: The Musical on Feb. 26 and 27. Based on the triumphant classic 1980s film featuring the troika of Dolly Parton, Lily Tomlin, and Jane Fonda, the story centers around the women overcoming their odious, misogynistic boss, Mr. Hart.

Once again, the KO Theater Department, spearheaded by Director of Theater Kyle Reynolds tackled the thorny issue of sexual harassment and used the material as a learning experience for the students. Concerned that Mr. Hart’s over-the-top behavior would appear as an endorsement because his character is played for laughs, prior to the performance the students attend a Zoom meeting with Broadway stars to discuss performing the work.

With the goal of opening up the dialogue, Reynolds recently brought in an impressive line-up of Broadway actors and actresses to the 9 to 5 student cast via Zoom, all of whom had first-hand knowledge of tackling difficult material on stage, and specifically surrounding the 9 to 5 show itself. These included Janelle Robinson (Mary Poppins, Showboat, Thoroughly Modern Millie), Ioana Alfanso (9 to 5, Wicked, American Son), Jessica Lea Patty (9 to 5, Evita, Bandstand), and Michael Mindlin (9 to 5, Hamilton, Aladdin). Additionally, two female members of the KO community shared their own accounts of what they faced as young women in college and transitioning into the workforce during the time period from the 1970s through the 1980s. Their accounts were first-hand examples of how despite the galvanizing women’s movement in the 1960s, discrimination and sexual harassment were ever-present.

Broadway star Janelle Robinson said, “If it is a show that is written well and has a good script, it will have controversy and conflict. Otherwise, there is nothing to fight for in the storyline.” She encouraged the actors and actresses to take the conflict at hand and turn it into something positive for the school and the community at large by showcasing the problems of that time.

“Yes it is an important conversation, and it is also important to remember why we do theater and that standing up on stage and portraying characters gives us the freedom to have these hard conversations and have things that speak to all of us,” she said. She encouraged the performers to keep open minds and use the performance to inform, enlighten, and open the story one can tell through this piece.”

Despite the challenging topic, the musical is chock full of fantastic dancing and musical numbers, opening with the rousing and energizing ensemble number “9 to 5.” The beautiful and powerful song of resilience and hope, “I Just Might,” blending the harmonies of the three female leads was a highlight as was the down-home hootenanny “Cowgirl's Revenge.”  The staging of “Hart to Heart”, a scene that occurs in the women’s bathroom with singers and dancers wearing the same red business suit and frizzy, badly permed wig of the main singer Roz appearing from a row of bathroom stalls, gained several hoots and hollers from the crowd. To the delight of the audience, when the women ultimately overcome Mr. Hart’s abuse, he is carted off on a rope suspended from the ceiling.

After 40 years from the movie’s premiere, the themes of 9 to 5 are as socially impactful as they ever were.