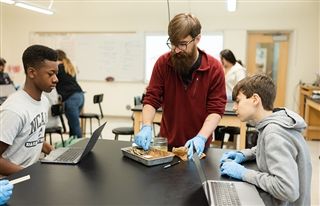 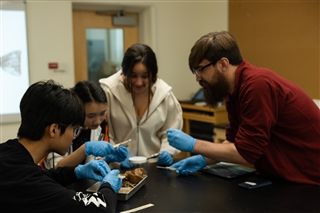 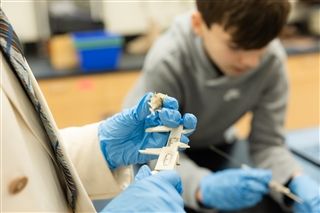 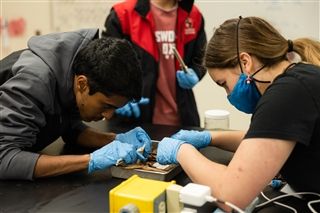 The Mysterious Case of the Stickleback

5/5/2022
Recently, students in Graham Hegeman’s biology class took on the mysterious case of the stickleback fish. What the heck is the stickleback, right? This particular kind of fish, Hegeman described, is known as a supermodel organism because of its use in understanding a number of questions in biology, including evolution, health/parasitology, genetics, and ecology. Stickleback can be found in the tidal part of the Connecticut River, as well as in Long Island Sound. In Alaska, Maine, Canada, and Europe, sticklebacks also live in freshwater lakes and ponds.

According to the fossil record, sticklebacks have remained relatively unchanged over the last several million years. However, KO students observed a group of stickleback from the Cook Inlet region of Alaska, which has since evolved to lose their pelvic spines. The focus of the students' experiments was to determine why the fish evolved. Our students measured the stickleback from several lakes to determine pelvic spine length and standard length. They then compared this data to environmental data to see what factors may be associated with stickleback losing their spines.

Populations in some lakes have huge spines, and populations in other lakes only a few miles away have no spines at all. Hegeman explained that evolutionary biologists were especially interested in this species based on this observation, and posed the question to students as to why stickleback would evolve to lose these important parts of their body. Hegeman gave them a few factors to consider including that about 12,000 years ago, the lakes these fish populations lived in didn't exist as the area was under a massive glacier. They knew that stickleback spread to these ponds a relatively short time ago. Because the stickleback reached those ponds from the ocean, they all had spines when they arrived there. So over the last several thousand years, several different populations of stickleback have evolved with a loss of their spine in multiple lakes.

The goal of the project is to have students build a comprehensive picture of the entire issue and solve for the absence of spines in the stickleback.  Hegeman said, “Initially, students think that the problem is simple and that stickleback lose their spines due to the lack of predators, but some ponds with no predators still have stickleback with normal spines.”

Hegeman admitted there is a bit of a spoiler alert, noting that nothing in biology is ever as straightforward as it seems. “The answer turns out to be super complicated,” he said. “Stickleback seem to have lost spines in different lakes for different reasons. In ponds that have lower than normal calcium, and have lower than normal amounts of trout, stickleback typically lose their spines. Also in ponds where stickleback are eaten by dragonfly larvae, the dragonflies catch the stickleback by the pelvic spines, and in these populations stickleback also lose their spines, regardless of trout/calcium presence.”

Hegeman is currently writing proposals with the stickleback lab at the University of Connecticut to start up more research and, hopefully, get KO students involved with research at the university.
Back