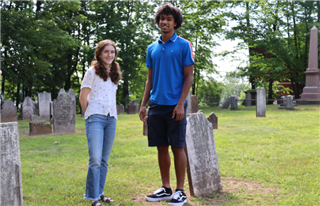 6/8/2022
Isaias Wooden '22 and Regina Miller '22 spoke at the West Hartford Town Planning and Zoning Commission meeting in favor of Wooden's petition to rename Sycamore Lane in West Hartford as Peleg Nott Lane. After waiting 3.5 hours as the TPZ worked through agenda items and then deliberated, the Commission voted in favor of renaming Sycamore Lane as Peleg Nott Lane.

Peleg Nott, a revolutionary war veteran and overseer of 150 acres of land west of Prospect Avenue, was enslaved and then freed by Jeremiah Wadsworth in 1780. Peleg Nott also served as Black Governor of Connecticut from 1780 to about 1800, representing enslaved, freed, and free Black residents of the state.

There was significant opposition from the four property owners along the street but, in part, due to the students' research, civic engagement, and testimonies, the TPZ approved the application with three votes in favor and one in opposition. This decision is a big victory for bringing to light West Hartford's complicated and difficult past as a town built in part by enslaved individuals. As Wooden noted in his closing remarks, "Peleg Nott Lane will serve as an enduring reminder to those who walk or drive by that they live in a town that values its history and understands the importance of acknowledging its heroes, regardless of their race, color, or creed."
Before the street name can be approved, the matter must go to the Town Council at next Tuesday night's Town Council Meeting at 7:30 pm. The property owners and Wooden will have one more opportunity to share their views on the matter and the Town Council will take the TPZ's decision into consideration before officially voting.
All in all, Wooden and Miller are living up to so much of what we hope for in our KO graduates. They are active citizens leading and serving in their community and are change agents, working to transform the town's history by acknowledging those who built this town and acting as leaders in the community for those who rarely had representation.

Read more of the petition here.
Back