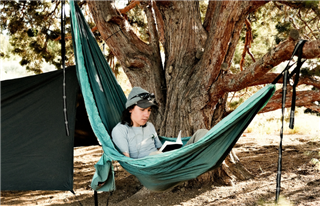 8/30/2022
Williams College-bound Nate Welsh ’22 shared his Outward Bound experience in Oregon this June as the latest recipient of the Perry S. Levy Outward Bound Scholarship, an endowed fund that provides an annual grant for a Kingswood Oxford student to attend a two-week Outward Bound program.
“I applied for the scholarship because I thought it would be a great chance to go outdoors, meet people, and explore a place that I hadn't gone to before,” said Welsh.
Welsh headed to Central Oregon for a 10-day white water rafting and rock climbing trip through Outward Bound Northwest where he challenged himself physically and mentally while exploring amazing wilderness areas. During the Initial days of the experience, the team of 12 students spent time building critical teamwork and outdoor skills. The group learned conflict resolution skills that helped them navigate interpersonal exchanges as each student took the reins of leading the group or certain roles and activities (dinner prep, striking the campsite, in charge of gear) as well as rotating responsibilities.
After learning some fundamental climbing techniques, basic gear, knots, and rope system, the group headed to Smith Rock State Park with two guides which Welsh said was the highlight of the trip. The following day, the team went a half mile off-road to an insider spot called “The Zoo” for some more climbing. One of the instructors who was a geography major explained how the land evolved and said that the rock they were climbing on was 17 million years old, after which a volcano erupted and carved this extraordinary canyon.
“Just being in those spaces and seeing the vastness was really affirming that I can’t really put into words,” he said.
On other days, the campers rafted along the wild and scenic Deschutes River and learned paddling methods, river hydrology, raft captaining, and self-rescue techniques. During the days on the river, the campers would wake up early, strike the camp, do a fire line of the tents, clean up the kitchen and dishes, and load all the gear on the gear boat. The group rafted 10, 20, or 30 miles a day encountering Class 2 and Class 3 rapids, and pulled back on shore to make dinner and engage in character-building activities. In true Nate style, he, unsurprisingly, snuck out under the stars and read poetry - Whitman’s Leaves of Grass.
“I had never done anything of that ilk before. It was a cool, new experience, but at this stage of my life, I felt a lot more prepared for it than I would have been a couple of years earlier,” he said. “I was able to connect with people who are a bit different from me with different views, learn some skills, and enjoy myself in the process. Not to be trite, but I did grow at KO in my last few years of high school, and I’m more sure of what I want out of life, who I am, and what I stand for.”

The Perry S. Levy Outward Bound Scholarship was established by Judie and Coleman B. Levy, their children – Dean ’87, Matthew ’89, and Evan ’93 – and Perry’s wife, Melissa Levy, in memory of Perry S. Levy ‘85, who passed away of cancer in October 1999. In order to be considered for the opportunity, students were asked to submit an example of how they lived their life to the fullest, their inspiration for doing so, and their interest in Outward Bound.
At KO, Perry was awarded the Merritt Prize, which honors a senior “who best demonstrates the results of a Kingswood Oxford education.” In addition to succeeding as a student at KO, Perry earned varsity letters in football, wrestling, and baseball and was active in various student organizations.