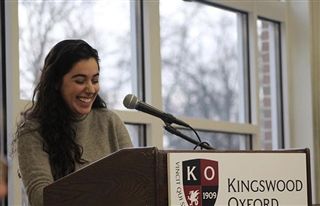 4/6/2018
At the Baird Journalism dinner on April 2, Nicole Wetsman ‘12 spoke to more than 40 students, faculty, staff, and parents about her experiences as a freelance science and health reporter. She detailed both the triumphs and challenges of her job and offered an inside view of the media realm today. Her work on topics ranging from pediatric medicine to seal brain
surgery has appeared in publications such as Popular Science, Gizmodo, Wired, and Vice.

With the student journalists in the audience in mind, she described the drive and conscientiousness needed to succeed as a reporter. “Be curious, follow your passions, be generally annoying,” she said. “It is a strange power and strange responsibility. You are taking care of people’s words. Having a platform is powerful, but it is important to not lose people’s trust.”
During her years at KO, Wetsman worked as a reporter, associate features editor, and features editor for the KO News. She also served as president of the forensic union club and co-captain of the varsity soccer team.
She said her passion for science was ignited during sophomore year in Fritz Goodman’s biology class. “It was the first time science was introduced to me in a way that I loved it,” she said. “I also realized I had a talent for explaining the subject to other students in my class when they didn’t understand it.”

During the course, the class was given an assignment that featured an article in Popular Science. “It was a revelation for me,”Wetsman said. “It was my two loves of journalism and science combined, and it felt right.”

It was then she decided she could marry the two interests into a career, she said, cautioning that it’s rare for someone to develop a clear career path so early on. Despite her early realization, she said, “It took working for my college paper and a few internships to fully realize what this career would look like.”

Wetsman went on to major in neuroscience at Bowdoin College, where she also served as editor-in-chief of the student newspaper, the Bowdoin Orient, an experience she recommends to any college student. “No matter what you go on to do, you can pull from skills learned in journalism,”Wetsman said. “Interviewing, drafting an email, asking intelligent questions, writing clearly –all of these things are critical skills, no matter what industry you end up in.”Reporting and editing for a college paper, she said, also provides students with a better understanding of the news they consume, and of the media.

Wetsman explained that college journalism is especially challenging because it’s so “hyper-local." “It can be hard to do, and even can upset friends,” she said. “You see the people you are writing about every day, and they are holding you accountable every step of the way.”

But she said writing for a college paper is a way to engage with the community and improve it., “The best way to show you love a place is to be critical of it,” she said. “It is important to do this for your community. Especially on a college campus, where it is easy to feel like you don’t have power, writing for the paper is a way to change this, to be critical, to be curious.”

While attending Bowdoin, Wetsman held a series of summer internships at Connecticut media outlets, including time at The Valley Press in Simsbury and WNPR in Hartford. Last December, she graduated from NYU with a master’s degree in science, health and environmental reporting. She credits her undergraduate degree in neuroscience and her love for the subject as formative springboards to becoming a reporter in the field.

Wetsman said she enjoys the freedom of being a freelance reporter, which includes being self-employed and working for multiple publications. This enables her to choose stories and develop relationships with a variety of different editors. She said some of the biggest challenges a reporter faces include more than a fair share of rejection and the hard work it takes to get over the barrier of feeling as if you are bothering someone.

Wetsman was candid about her responsibility as a reporter to publish the truth. “I lose sleep over worrying I might have facts wrong, that people I interview might feel misrepresented,” she said. When asked to describe the hardest thing she ever had to write about, she cited her article on screening student athletes for heart conditions prior to their playing a sport, which required interviewing a mother who had lost her son to a cardiac sports death.

“It was a very controversial thing to write about,” she said. “You can’t just write about what both sides said; you have to factor everything in and come down on one side or the other, where the weight of the evidence lives.”

Westman admits that it’s is a strange time to be in journalism, an enterprise that has been rocked by the most recent presidential election. “It has really made those of us in this field look at everything we do with a fine-toothed comb,” she said, “and question every step of the process –what is the role [of journalism], what does it mean to be fair, why am I selecting certain people for stories.”

When asked about predictions, made several years ago, about the death of print journalism, Wetsman said, “Journalism was never going to die. It was going to come back in a different way.”She said that digital media outlets such Buzzfeed have provided models of how to support quality journalism by including other content. “Cute cat videos will pay for good research to be done,” she said. “You can argue whether that is positive or negative.”
But, she concluded, “Journalism is more important than ever. It is messy and creative, but it is self-moving and helps us makes things make sense.”

To see what Nicole Wetsman has been writing recently, take a look at her website.
Back