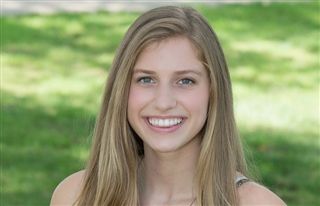 Each year, Kingswood Oxford seniors are required to write a 15 to 20-page thesis on a subject of their choice, a culmination of four years of the school’s rigorous writing program. This year, they were required to reflect on a literary work or compare more than one. Stanton first selected Night by Elie Wiesel for two reasons. It is one of her mother’s favorite books, and she explained, with Wiesel’s passing in July, 2016 it felt very topical. Night is a candid and deeply poignant autobiographical account of Wiesel’s survival as a teenager in the Nazi death camps. At the coaxing of English teacher Meg Kasprak, Stanton took her paper to the next level by adding in a second comparative work, Maus by Art Spiegelman, a graphic novel that tells the story of a Jewish survivor of Hitler’s Europe, and his son, a cartoonist coming to terms with his father’s story.

Stanton’s thesis tackled the idea that while both novels took on vastly different methods of representation, there was a common conclusion. By unraveling the humanity of the Jewish people, the Nazis broke the understanding of what it means to be human for everyone. Throughout her paper, Stanton explored how each work depicted dehumanization, specifically, how the Nazi’s treated the Jewish people through propaganda, actions, and words. Stanton found Night depicted this process more through words while Maus portrayed the degradation through actions and drawings. What coalesced in both books for Stanton was the idea that by being treated as less than human, ultimately there was no such thing as being human. Stanton said the biggest challenge in developing her paper was solidifying her ideas before she knew what she was arguing, and finding common threads between the two authors' words. Once she was able to do this, it was much easier to reinforce ideas.

Stanton, a resident of West Hartford, now attends Vanderbilt University and is majoring in History. Of her KO education, she said, "Kingswood Oxford taught me how to write very well and formulate my thoughts. This project especially allowed me to be able to see the bigger picture of writing on a bigger scale. I feel like I was incredibly prepared for college.”
Back