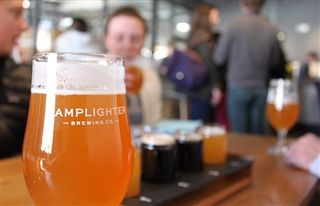 4/11/2018
Jackie Pisani
After studying molecular biology and biochemistry as an undergraduate at Middlebury College, you can’t blame A.C. Jones ‘08 for his conviction that he was on track to becoming a doctor. He moved to Boston in 2013 to work at Massachusetts General and began prepping for the MCAT, the medical school entrance exam. But, happily, for the lovers of curated craft beer in Cambridge, Massachusetts, the universe disabused Jones from his medical pursuit. Lamplighter Brewery, launched in 2016 with Jones and his two partners, Cayla Marvil and Tyler Fitzpatrick, serves complex, aromatic beers that appeal to both the sophisticated and novice beer drinkers.

In addition to a crushing workload in college, Jones began experimenting with home brewing beers. He describes the Middlebury beer culture as ubiquitous. “Middlebury is a town of about 8,500 people, and it has three to four breweries. People are doing really interesting work. It’s a thing that’s a thing.” After moving to Boston, Jones recognized a dearth of breweries to serve its population and understood an opportunity when he saw one. “The idea of opening a brewery became a joke between my partner, Cayla, and me. But, then we drew up a business plan, flew off to the Siebel Institute of Technology in Chicago, the oldest brewing academy in the country, and got an associates degree in brewing.”

Navigating a red hot real estate market and byzantine zoning laws, Jones opened Lamplighter in a converted former garage that provided the necessary space to house the bulky equipment. With an industrial and raw aesthetic, Lamplighter is, as it should be, all about the beer. What makes Lamplighter truly distinct is its focus on wild fermentation. Jones explains, “We use an alternative yeast that is traditional and use a much less explored method of making beer.” Describing his brews as “big and funky”, it takes approximately two weeks to a month to craft a beer. Lamplighter’s master head brewer, Tyler, who has worked in the industry for nine years, constantly tweaks the process. “We start with thinking about the final characteristics of the beer. What’s the style, the hops, the mouth feel? We’re making technique decisions in order to get to the end product, and our quality keeps getting better and better.”

Lamplighter beers rotate constantly, and no one beer is on tap for more than a month at a time. The menu currently showcases twelve beers: porters, Belgian, double IPAs, sours, that feature either notes of caramel, mandarin orange or wheat. Named after songs, in a self-described “kind of chaos” from the musty Astral Weeks to the lemony Sound and Vision, the connoisseur can find a range to satisfy the palate. Jones admits, “Once you are a craft beer drinker, you don’t go back to drinking a Bud Light.” In addition to being served in the Lamplighter 70 seat taproom, some beers are served in take-home growlers or can be found on tap in other Boston establishments.

In addition to his walk-to-work commute, Jones considers his team to be the best part of his job.“I have a really awesome team that’s completely overqualified. It’s a great work environment that loves to experiment.” Even though Jones no longer pursues a career in medicine, he can’t help but describe his work at the Lamplighter as “triage”. He credits his KO education that helped him work hard and prioritize his responsibilities.“My to-do list is thirty miles long. But, I’ve learned how to put everything in its place without freaking out about it. I’ve been doing it since I was twelve years old.”
Back