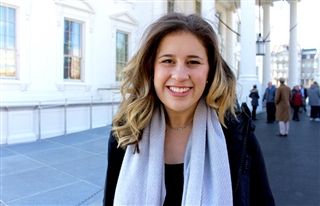 4/11/2018
Jackie Pisani
Purposefully wending her way through tourists snapping photos of the White House in Lafayette Park each morning in the summer of 2016, Molly Papermaster ‘14 headed to her internship at the aforementioned a bit slack-jawed. As she turned onto Pennsylvania Avenue, Papermaster acknowledged, “Seeing all those people looking in awe at the building was a very surreal feeling.” Knowing that you are granted access into one of the most highly secure seats of power in the world was an understandably heady experience for a college student, even one familiar with Washington’s inner workings by binge-watching West Wing, Scandal and House of Cards.

Currently a junior at Boston University studying political science, Papermaster applied online for the coveted internship position at the White House. After waiting a long period for a response, Papermaster was interviewed over the phone by a staffer and was accepted into the program as one of approximately 100 summer interns. Working in the Department of Management and Administration in the Visitor’s Office at the White House, Papermaster managed the daily correspondence between the Visitors’ Office and all 535 congressional offices by promptly responding to all phone and email inquiries as well as writing and distributing a weekly newsletter which provided key updates and guidance. Marrying her passion for hospitality and event planning (her original college major), Papermaster helped coordinate 100 plus volunteers for large White House events, including the All Appointees Event, Congressional Picnic, Fourth of July, and the Singapore State Arrival. KO’s foundational organizational planning paid off in dividends as Papermaster compiled the transition manual event binder for the White House Easter Egg Roll, the largest White House event with over 30,000 attendees.

True to its depiction on television shows, Papermaster describes the pace at the White House as “always moving.” Although initially intimidated by the White House scope and the grandeur, Papermaster soon found herself in her element in the Visitors' Office, surrounded by generous, energetic and enthusiastic talent. “The team was absolutely incredible. They are extremely special and passionate people and have taught me so much. The intellectual capital in this one building is overwhelming. Each day you are learning and growing. You can never predict whom you might run into or what you might see on a given day.” Including former President Obama.

As part of the internship program, the group had an audience with the President who addressed the youth in a grand room replete with gold jacquard drapery, gleaming crystal chandeliers and an oil painting of George Washington, lest you were to forget where you are. One intern asked the President how he maintained his optimism, which he attributed to his upbringing in Hawaii. Responding to a question about race relations, he cautioned the group that in wanting to improve race relations that they themselves do not become “so rigid and sensitive in terms of your own views that instead of opening up dialogue you harden lines and divisions” Continuing on, the President advised the interns, “Don’t get bored. Don’t get cynical. You guys are the most privileged people at the most secure and prosperous time in human history...Being useful and having a satisfying life and making a contribution, that’s entirely within your control. Orient yourself towards having an impact and making a difference.” At the end of the meeting, the interns presented the President with a handmade birthday card with glitter. In a display of his low-key wit, the President chided the interns for having their parents help them make the card.
Another highlight for Papermaster was meeting with the First Lady. “She is an incredible role model. One thing that makes her so special is how sincere she is. She took the time to hug every single intern.” As an owner of a Portuguese water dog, Papermaster had the good fortune to meet the First Dogs, Sunny and Bo, who are the same breed as her pet. Like most everyone’s misbehaved dogs that are banished from the furniture, Sunny and Bo sit next to Papermaster on a magnificent settee in a treasured photo.

After taking AP Political Science at KO, Papermaster knew she would pursue this as her degree in college as well as to apply for this internship at the White House. Her interest in event planning also stems from some of her KO activities like Epic and Shield and Dragon. This past spring, Papermaster studied abroad in Sydney, Australia and interned in an events department in New York City in the summer.

Although moving to D.C. might down the road for Papermaster, she definitely knows that the key to future success is passion and hard work. “I learned a lot about myself from this experience. I learned that I love being part of something so much larger than myself. It pays off to be passionate. If you don’t care about what you’re doing, then why do it?”
Back