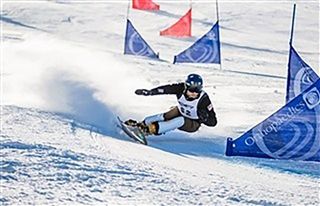 4/11/2018
Jackie Pisani
Dylan Udolf ’16, a professional snowboarder and a sophomore at Northeastern University, won his first Nor-Am Alpine Snowboard race in Minnesota. That win helped him earn a spot at the 2018 World Cup Olympic qualifier to be held in Rogla, Slovenia on January 20 -22, 2018.

Udolf is a two-time national champion, two-time Junior World Champion participant and holder of 10 national titles. Udolf has undergone two significant surgeries over the past five years. A torn ACL and meniscus in 2013 and a fractured shoulder socket in 2016 haven't slowed Udolf down from chasing his dreams. In 2015, he was named to The United States Snowboard Racing Development Team. He is also an avid community service volunteer -along with his sisters Samantha '12 and Claudia '14, he founded Sam’s Race For a Place, which raises money and awareness for the Ronald McDonald House in Springfield, Mass. To date, Dylan and his sisters have raised over $60,000 for the House.

Udolf’s father, Robert said, “ If it weren’t the flexibility and support of the KO teachers and the school, Dylan would never have had the opportunity to chase his dream!"