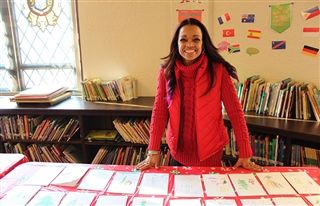 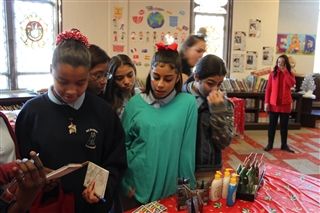 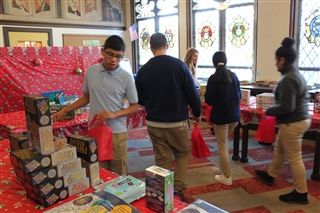 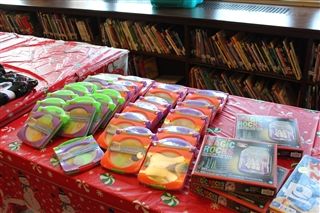 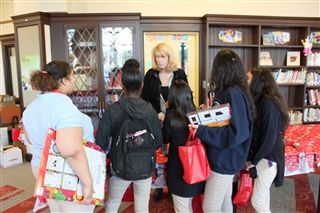 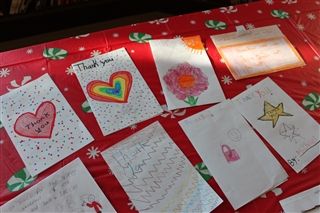 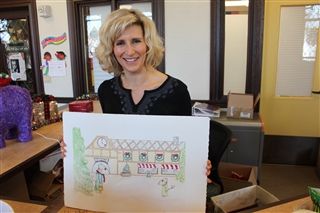 “Each classroom is allotted time to come in during the day,” explained event organizer Karen Diaz. “Then each student may pick one book, one gift, either for themselves or to give to someone else, and a variety of snacks.”

Diaz along with several KO Parent Association volunteers spent the latter part of the day on Monday setting up for the event, which took place in the school’s library. Together, they arranged tables adorned with festive red tablecloths, artificial snow, twinkling Christmas trees, and even an inflatable Darth Vader holding a giant candy cane.

“We’re like the little elves,” said longtime volunteer and KO parent Teresa Ravalese, who began working the Holiday Bazaar at its founding. Monica Bisgaard, the wife of former Head of School, Dennis Bisgaard, served as an organizer for a number of years after taking over from KO parent, Liz Benbrook. Benbrook, who passed away in 2013, was a steadfast volunteer at Fox, often participating through KO’s Middle School service learning partnership.

“At that time, the students would receive tickets for good behavior from their classrooms, and then trade in their tickets for gifts,” explained Ravalese. “We had a variety of donated, gently used items. Anything from planters to picture frames to scarves.”

“The kids would really love anything,” added volunteer Sandy Brown. “Often they were looking for a gift to give to a family member like their grandma or baby sister. It was just the joy of giving.”

While the Bazaar no longer uses the ticket system, the same joy carried through the duration of the afternoon. Students hurried through the library to explore the selection of books, gifts, and snacks. Some tailored their choices with friends or family members in mind, while others practiced the art of treating themselves.

“How am I expected to choose just one thing?” exclaimed eighth-grader, Jen, when she first laid eyes on the holiday bounty. “It’s all so cool!”

The book nook offered classic titles from authors like Judy Blume and Lemony Snicket. Eighth-grader, Joseph, turned the pages of several paperbacks before making a decision. His final pick? True Legend, the story of basketball star Drew Robinson. Volunteer Heather Clifford expressed her own excitement at seeing the young bookworms. Having self-published her own literary work, A Very Giving Christmas, in 2009, she makes it a point to read the story to the kindergarten and first-grade classrooms every year on the day of the event.

“It’s the greatest thing to do,” said Clifford. “And then afterward it’s wonderful to see the kids come in here with such bright smiles.”

Upon stuffing their bags with a book (or two) the students dashed to the gift tables. Groups of friends ogled over puzzle sets, headphones, fuzzy gloves, and art kits. One youngster picked up a plush blanket in the shape of a mermaid tale, hugging it closely as she headed for the snack station.

“We have a partnership with A.C. Moore in Manchester so that’s where a lot of the toys came from,” explained Diaz. “For the books, we actually had an overflow of donations from the book drive last year at KO.”

Before heading out, each student grabbed a sweet, salty, and savory snack from the large bowls laid out on the circulation desk. Many could be seen unwrapping candy canes and Oreo cookies before even leaving the library.

“This event brings so much joy to our kids,” said Fox faculty member Yamil Ramos. He sported a holiday sweater featuring Santa doing the dab, a popular dance move, especially amongst the students. “A lot of them didn’t even know it was happening today, so it came as a total surprise.”

As the students lined up to head back to class, a loud chorus of “thank yous!” could be heard over the playlist of holiday classics. Many students penned thank you notes to Diaz before the event was even over. Alex, a fourth-grade student, offered his own words of gratitude.“Thank you so much for the gifts that you gave me,” he wrote. “I’m so thankful that you donated to me."
Back