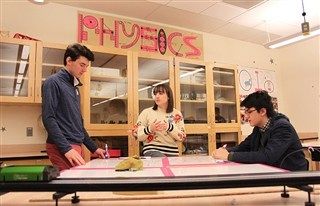 11/14/2018
Our AP Physics C: Mechanics students performed a self-directed lab to determine the coefficient of kinetic friction (μk) between a cart and a ramp in a modified Atwood machine.  The students were given the following scenario.  The cart is connected to the hanging masses as shown and the system is released from rest.  The hanging masses then hit the floor and the cart coasts to a stop (without hitting the pulley!).  Using only a meterstick, the students were tasked with determining the coefficient of kinetic friction (basically a measure of how “sticky” the interface is) between the cart and the ramp.
There were a few challenges here.  First, the students needed to derive a theoretical equation for the coefficient of friction in terms of only the masses involved (cart and hanging), the initial height of the hanging masses, and the total distance the cart traveled, using primarily conservation of energy principles.  Second, the students needed to set up the experiment to mimic the given scenario, requiring them to prescribe the amount of friction by adjusting a device attached to the cart manually to ensure the cart would coast under the influence of a range of hanging masses. Finally, the students had to decide what data to collect!
Working in pairs, the students meticulously labored over the lab, documented their process on whiteboards, collaborated over strategies to collect data, and recorded their results. Their teacher, Kathleen DiSanto, circulated among the groups and asking guiding questions about their thinking and choices. Does your order of magnitude make sense? What parameters will you control and what change will result?  How are you going to analyze your data so you can extract the coefficient of friction from the slope of the best fit line? The teams were quietly animated, moved by their work and absorbed in their problems.
Two students explained some fundamentals while collecting their data.
Eryk Jones ’19 explained, “Each time the hanging mass increased on the other side of the pulley, the distance of the cart increased. We found an equation for the coefficient of friction using the distance between the initial hanging weight and the ground, the distance the cart traveled before it stopped, and the two masses. Using those four things, because we can measure these, we can measure the distance it will take the cart to stop.”
Ben Small ’19 said “We need to verify how accurate our data and equation are, taking into account air resistance, etc. Although they are small factors, they do make a difference.”
This type of lab is quite common in this course.  The students begin with theory, collect data, and use linearization to assess accuracy and extract results.  DiSanto reflects, “The best part of these student-driven investigations is watching how much more comfortable and open the students become with not knowing where the lab will take them.  At the start of the year, some students are almost alarmed at the absence of a step-by-step guide. Yet as they become more confident in their skills, they truly rely on each other and realize they can handle (and even enjoy) the challenge!”
Back