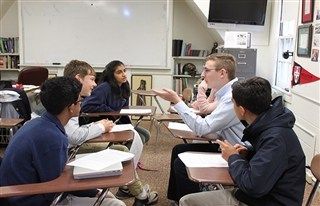 12/5/2018
Be prepared to test your wits when you enter the Form 3 Empires and Republics class with David Baker. In a new lesson designed to bring authentic learning into the classroom, students created an “ideal” government after reading Plato’s Republic and Aristotle’s The Politics. The students assessed the two governmental models and decided which elements of each Greek philosopher's governments would be best for the ideal government. When Baker explained to the class the task for the day, one student audibly exclaimed, “Yes!”, clearly animated by the challenge.
Plato examined law and justice in the flawed governments of timocracy, oligarchy, democracy, and tyranny. Through his analysis, Plato recommended establishing the Republic as the ideal state where a government is ruled by the guardians of the law due to their wisdom. Whereas Plato’s form of government represents an ideal state, Aristotle explored practical constitutions that city-states can realistically put into effect. He identified six different constitutions, and he classified them as either “true” or “defective.” For Aristotle, the Polity was a perfect state governed by an oligarchy executive branch and a democratic legislative branch all of whom were subject to the laws of a constitution.
The class was divided into groups to discuss the advantages and disadvantages of the governmental structures that were posed by the philosophers.  One member of a group contended that political power should be equal among the social groups but another student acknowledged the difficulty in engaging the lower classes in the political process due to lack of education and economic opportunity. While the students worked autonomously, Baker circulated around the class and guided and tested the students' rationale behind their choices.
In the spirit of Plato and Aristotle, the groups developed the ideal government for a peaceful, justice and successful society in today’s world. They composed a list of the top ten attributes a government must provide. One group posed a government with the following characteristics: a constitution, equal justice system, affordable health care, equal education, mandatory military service, high tech infrastructure, flat tax, equal government for all classes, voting at age of 18, and limiting foreign affairs. The students then developed a diagram of the government’s leadership and indicated how each position of the government related to the top ten government provisions.
This back and forth small group discussion allowed the students to dig deeper into the material and challenge their assumptions. While observing the respectful arguments of the students, one was struck by the ancient wisdom of the classic philosophers that the way to get to the truth is to engage in robust, civil debate. Talk about old school.
Back