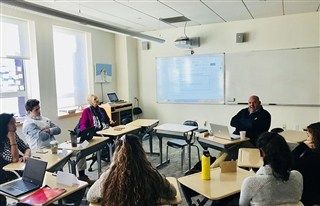 An Educator at Heart: Head of School Tom Dillow steps into the classroom

12/7/2018
To say Head of School Tom Dillow is a busy individual would be a vast understatement. Appointed this past July, Dillow is fully immersed in the integral workings of KO from top-level decision making to ensuring that his staff, faculty, and students are happy and thriving on a daily basis. On top of it all, Dillow is himself a parent to sons Ronan, class of 2021 and Aidan, class of 2022, who joined the KO community this fall, Tadhg who attends a local elementary school and Finn who is finishing his senior year in high school back in Florida.

An educator at heart, Dillow holds his love for teaching close, and therefore, he didn’t pass up the opportunity to take off his head of school hat and put on his sociology hat, stepping into room 206 in Chase Tallwood to teach Stacey Savin’s International Human Rights class Thursday morning.

On the docket? Tribalism - looking at how we make both moral and ethical judgments based on our associations with the groups we affiliate with.

He asked the students to make a list of groups that they identified themselves a part of whether as a church member, political party member, a dancer, a robotics lover or New York Giants fan. Next, he challenged them to think about whether their association with a particular group altered how they felt about others in this group versus those outside it. Did they make assumptions about others based on these associations? Dillow, a diehard Dallas Cowboy fan, used a humorous sports analogy to make his point about the automatic assumptions one makes about those who are "in" or "outside" of our groups.

In prehistoric times, survival was based on associating with a group that could keep one alive. Even now, hundreds of thousands of years later, these groups that we associate with remain a powerful influence. Dillow looked at how deeply these associations impact our thinking. Studies show humans are hard-wired to create and identify with groups, which manifests itself in everything from politics to rooting for certain sports teams.

Dillow discussed confirmation bias (if our affiliation with groups allows us to accept things that are not necessarily true), Henri Tajfel’s social identity theory (the concept of a social identity as a way in which to explain behavior within groups) and implicit association (the brain categorizing things in the world around it). He also examined the Asch social conformity experiment, and Tribe, a book by Sebastian Junger, which looks at how humans make the majority of decisions by using the emotional side of the brain as opposed to the rational side.

Dillow concluded that despite all the various fields of thought one truth resonates throughout: as humans, we have an innate sense to belong, to be acknowledged and to be recognized.

Based on this classroom lesson one can easily determine, no matter your affiliation, that Dillow is a compelling and dynamic educator whose passion for learning and the classroom manifests itself in many ways, including taking the time on a cold winter morning to teach and reflect with our students.
Back