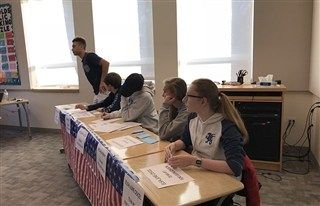 Public Speaking: The Art of Persuasion

12/13/2018
On Tuesday, December 11, students from Director of Theater Kyle Reynolds's public speaking class gathered first thing in the morning ready to debate. Despite the comfy nature of their exam dress code of sweats and sneakers, the group pushed through their comfort zone to tackle the current and hot-button issue of the legalization of medicinal marijuana.

Students were assigned sides and given two weeks to prepare and gather notes before presenting their arguments. Reynolds moderated the debate, and a panel of faculty and staff members including Senior Associate Director of Admissions Susan Emery, Upper School counselor Chastity Rodriguez, Classics instructor Maureen Lamb, Director of Academic Skills Jackie Rubin and Associate Director of College Advising Ben Waldman judged the teams. Each staffer posed a question focusing on a particular angle to frame the debate discussion. The questions were as follows:

On Team #1, the pro-legalization side, sat Elsa June Ciscel ‘22, Megan Murphy ‘22, Benjamin Iozzo ‘20, Aidan Dillow ‘22, and Wesley Pierce ‘20. On Team #2, the anti-legalization group, were Ben Baby ‘22, Hannah Shames ‘20, Justin Edwards ‘21, Jillian Wells ‘20 and Evan Bygrave ‘21. Debaters were judged on a rubric of respect, information, rebuttal, use of facts/stats, organization and understanding of the topic. Additionally, they were scored on eye contact, confidence, diction. Reynolds challenged to students to utilize persuasive speaking and pause strategies to establish credibility and drive their arguments home. Both sides provided an opening and closing statement as well as rebuttals to the opposition.
The group that fought for the legalization of marijuana offered statistics on its medicinal value, the short and long-term effects on the brain and its use as a cancer therapy treatment. They argued that there would be a decrease in black market sales of the drug if it was more accessible and legal. Additionally, they felt that legalizing the drug would create jobs and increase investment opportunities and cited facts about property values increasing around dispensaries in areas where it has been legalized.

The opposition argued that marijuana use in any amount increases the risk of addiction and serves as a gateway to more potent drugs like heroin and ecstasy. They also contended that the drug lowers the quality of life and increases a users' tolerance so they continue to need the drug in higher, more frequent amounts. Finally, they raised the question of morality and suggested ways the government could seek alternative methods to increase state revenue without the legalization of marijuana.

“I was impressed with our students' ability to engage in civil discourse about a controversial topic at the national and state level,” said Emery. “Both sides showed respect for each other, listened to each other's arguments, and responded accordingly. Our students personalized their argument by comparing national data to the state of Connecticut and the Kingwood Oxford community. Not only did the students learn and practice debate skills like using data, facts, and statistics to support their claims, they also had to set aside their personal opinions and focus on what they learned in the areas of health, legalization, economics, public opinion, and morality.”

Public speaking is an essential skill that will serve KO students throughout their careers. Students learn to critically think through their arguments with confidence in a clear and poised fashion. Bring your "A" game parents when your children start asking to borrow the car keys. You've been warned.
Back