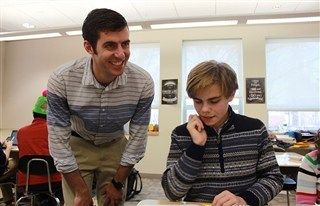 1/18/2019
Upper School Mathematics teacher Alex Hoerman believes all of his students will succeed in their lives after KO. From college to internships and travel opportunities, the door, he says, is wide open. But what about life after college? What life’s challenges will face our students in their adult lives?

On Thursday, January 17, Hoerman’s precalculus students answered just that. Tasked with the “Life After College Project,” the class worked through a present value formula for borrowing money that guided them through real-world scenarios for buying a car and repaying college loans. Hoerman explained that the students work with exponential functions, and the application of interest is an exponential function. The students applied a future value formula to save for a house and retirement. As the instructions exhorted from the page, “No matter how young you are, retirement should be on your mind!”

Life, the students found, does exist after college. But, life can certainly be expensive.

Braden Rose ’21, Molly Jones ’20, and Julia Kanaan ’20 sat together at the front of the classroom, hastily crunching numbers into their graphing calculators and jotting down their results.

“We’re using different equations to determine things like how to save for the future or how much money to take out in student loans…things like that,” Jones said. “It definitely makes me appreciate my parents more. There all of these expenses that I never really thought about.”

Rose voiced his agreement.“It all adds up so quickly!” he said. “I didn’t realize how expensive college and law school is.”

Each student researched and selected practical considerations for their future education, employment, housing, and transportation. Rose envisioned moving to Boston post-law school and renting an apartment in the North End while saving for the downpayment on his first home. He said he experienced quite a sticker shock after some virtual apartment-hunting, but set a strategic plan for saving in other ways.

“It’s fun thinking of ways to save money,” he explained. “Like thinking about getting Netflix instead of cable, or not taking that trip to Starbucks. There’s just a lot of things to keep track of.”

After graduation, Rose determined he would have to pay approximately $1,980 per month in student loans. “I went to graduate and law school, so the number is a little bit scary,” Rose said of his pseudo-future. “But, it is a great dose of reality.”

Jones mapped our a similar pathway to Beantown, with plans to attend Harvard Medical School followed by a career as a cardiothoracic surgeon. She selected a house through Zillow in Jamaica Plains, instead of downtown, in an effort to cut costs. She also chose to forgo a car, instead opting for public transportation.

“It’s a lot less considering a monthly T-pass is only about $100 a month,” she said.

Kanaan planned on becoming a pediatric pulmonologist, earning $72,000 dollars as a first-year resident living near Boston. In an effort to be cost conscious, she earned her degree at UCONN Medical School so she would qualify for in-state tuition.

Hoerman circulated throughout the class as the students worked through their calculations, stopping by each group to answer their questions and guiding them to uncover the answers by themselves.

“Why is a house so expensive with a 30-year mortgage?” one student asked. “It’s almost double than the original cost of the house!”

“Why do you think?” prodded Hoerman.

Answering his own question the student replied, “Because I’m paying a lower amount of money per month on the mortgage, but then I have all this interest over so many years.”

Hoerman said that one goal in the class is to understand how interest plays for you and against you when you take out a 30-year mortgage. The class also inputted their expenses into Excel spreadsheets, and Hoerman noted that using the software was yet another practical skill to master in addition to learning the harsh truth about managing money and taxes.

Rose had “purchased” a BMW and realized after the assignment that he was in the red monthly. “Maybe I should start with a bike,” he considered.

As The Maytones sang, “Anywhere you go it’s the same cry, money worries.”
Precalculus is an Upper School math course that provides students with a foundation for continued studies in calculus, statistics, or other quantitative courses in college. The major focus of this course is solving and graphing equations in each family of functions (rational, exponential, logarithmic, etc). Through a graphical, algebraic, and numeric approach, students develop a strong conceptual understanding of problems, mathematical reasoning, and problem-solving ability.
Back