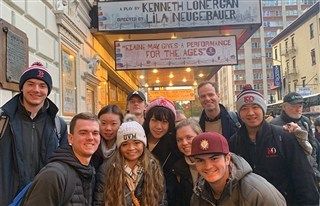 1/23/2019
As a former longtime New York City resident, Upper School English teacher, Bill Martino wanted to share his love for the city that never sleeps and so he created a senior elective that conveys the heartbeat and the heartache of one of the most vibrant places on the planet. His class, "New York Literature: The Dream, the Grit and the Grind," centers on different portrayals of New York, how the city changes over time and how the city impacts those who live there.
“There’s just something about New York. It’s one of the most populous places, but it can be a very lonely place, too. In the stories we read, the characters are on a path to self-discovery within the chaos of the city. It’s personal and intimate, but at the same time, one can lose oneself in its distraction. And, that’s the great irony of New York.
The class begins with the work of Collum McCann, Let the Great World Spin, a National Book Award for Fiction winner, that weaves multiple perspectives around the day that Philippe Petit tightrope-walked across the Twin Towers in 1974. The Towers serve as a metaphor for tragedy, and this is the first time Martino has taught this text to a class that was not born at the time of the terrorist attack. The class also reads James Baldwin’s The Fire Next Time, a profound examination of the race problem in America. “His voice is even more relevant now. There’s an urgency in his essays, and it’s important for the students to read him,” explained Martino. Through the lens of Jay McInerney, Joan Didion, Arthur Miller and others, the students learn how the city shaped the experiences of the characters in the novels for better or worse.
To experience the City firsthand, the class attended a play, The Waverly Gallery by Kenneth Lonergan. It’s a quiet play that depicts an aging woman with dementia and its corresponding impact on her family with a cast that included Elaine May, Joan Allen, and Michael Cera. Rather than take in a Broadway musical extravaganza, Martino wanted a play with more focus on writing and words rather than musical numbers. Before heading to the play, the class roamed Union Square, purchased food at the green market and sipped coffees.
“The students were so great on the trip. They were attentive, and they asked great questions about the play. That hour an a half of independence was important for them to wander around Union Square with friends, to sense the energy of New York and to capture a more authentic New York experience,” Martino said.
Back